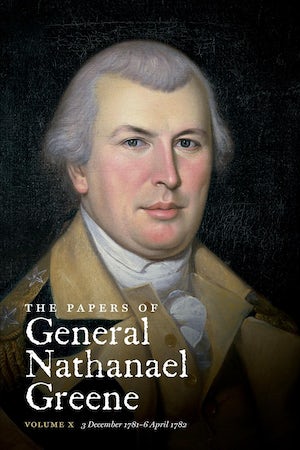 To purchase online via an independent bookstore, visit Bookshop.org
This volume continues the best and most detailed study of the Revolutionary War in the South. More than 780 documents illuminate a vital but largely overlooked phase of the war--the lengthy and turbulent period from allied victory at Yorktown until the final achievement of peace and American independence.

By December of 1781, General Nathanael Greene's army had forced the British into retreating to Charleston, South Carolina. But in the lower South, in particular, the war was far from over. Greene's position as commander of the Southern Department involved him in nearly every aspect of the military, political, and economic life of the region during the last years of the war. Thus, his papers provide an overview not only of the war, but also of politics, the economy, and life in the South. In addition, the documents in this volume show Greene in a different light: the master strategist of earlier volumes has now given way to Greene as innovative military leader and politically astute general.

"This comprehensive and authoritative edition of [Nathanael Greene's] papers-a tribute to the scholars who for more than thirty years gathered and prepared texts-makes clear what a complex and talented man Greene was and why the winning of independence was such an arduous task."--Journal of Southern History

"[An] excellent collection of correspondence. . . . The tenth installment of the Nathanael Greene papers continues the proud tradition set by its predecessors. It faithfully reproduces the most important letters to and from Greene and compresses into well-annotated abstracts less significant communications, which constitute 69 percent of the documents covered by the volume. Conrad's fine introduction ably surveys the documentary record that he and his team have assembled."--Journal of the Early Republic

"As in their earlier works, Dennis Conrad and his colleagues draw upon a rich array of primary and secondary sources to illuminate Greene's correspondence. Scholars of diverse fields and backgrounds will be richly rewarded by using these fine volumes, especially historians of battle."--Journal of Military History