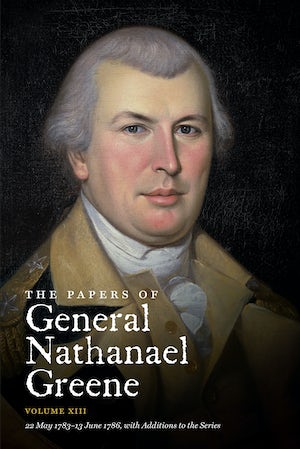 To purchase online via an independent bookstore, visit Bookshop.org
This thirteenth and final volume of the series devoted to the papers of General Nathanael Greene includes correspondence to and from Greene from the end of the Revolutionary War up to his death in June 1786. It concludes with an epilogue and an addendum of forty-six documents that have come to light since the volumes in which they would have appeared have been published.

The documents presented here trace the dismissal of the Southern Army and details of salutes offered to Greene by the citizens of Richmond, Fredericksburg, and Alexandria, Virginia, and Annapolis and Baltimore, Maryland, as he traveled back home. Greene spent three years after the close of the war attempting to settle his wartime debts, many of which were incurred as a result of guarantees he made on behalf of army contractors. He sought assistance in New York, Philadelphia, and Charleston; from the president of Congress; and from Dutch investors, but was declined at every turn. Within a year of relocating his family to Mulberry Grove plantation, near Savannah, after finally reaching an agreement with one of his principal creditors, Greene became ill. He died a week later, at the age of forty-three.

"This comprehensive and authoritative edition of [Nathanael Greene's] papers-a tribute to the scholars who for more than thirty years gathered and prepared texts-makes clear what a complex and talented man Greene was and why the winning of independence was such an arduous task."--Journal of Southern History

"Volume 13 of The Papers of Nathanael Greene exhibits the same superb editing and annotation found in the previous volumes. This meticulously edited work provides scholars with an invaluable source for researching the Revolutionary War."--North Carolina Historical Review