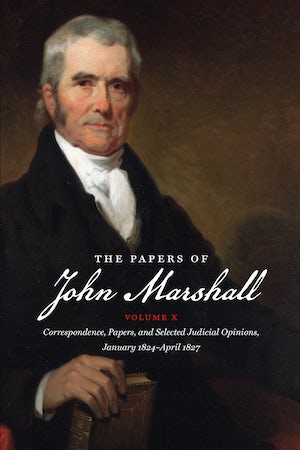 This volume continues the acclaimed annotated edition of the papers of Chief Justice John Marshall, the great statesman and jurist. The constitutional nationalism of the Marshall Court reached its peak in 1824 with Gibbons v. Ogden, in which Marshall broadly expounded the commerce clause while striking down New York's steamboat monopoly laws. By 1827, however, a crack in the nationalist consensus revealed itself in Ogden v. Saunders, a contract clause case that elicited Marshall's first and only dissent on a question of constitutional law.

Marshall's active life outside the courtroom included work on two long-standing projects: revision of his Life of George Washington and preparation of an edition of Washington's correspondence. In his correspondence appearing in this volume, Marshall comments on such topics as the causes of the Revolution, the military history of the war, the social scene in Washington, the abolition of slavery, female education, and the novels of Jane Austen.

"A fine example of historical editing."--Journal of the Early Republic

"The editors continue to meet the high standards of previous volumes, with notes preceding the major Supreme Court cases amply providing both the legal and historical contexts of the cases and controversies."--Journal of Southern History