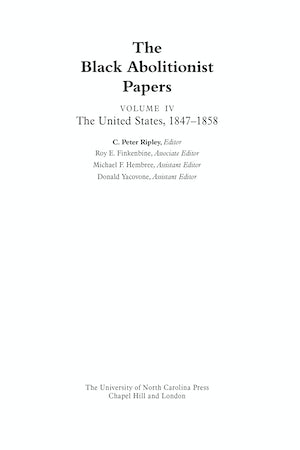 The passage of the Fugitive Slave Law, more than any other event in the 1850s, provoked a widespread, emotionally charged reaction among northern blacks. Entire communities responded to the law that threatened free blacks as well as fugitive slaves with arbitrary arrest and enslavement. This volume pays particular attention to black resistance through such community efforts as vigilance committees and the underground railroad.

This five-volume documentary collection--culled from an international archival search that turned up over 14,000 letters, speeches, pamphlets, essays, and newspaper editorials--reveals how black abolitionists represented the core of the antislavery movement. While the first two volumes consider black abolitionists in the British Isles and Canada (the home of some 60,000 black Americans on the eve of the Civil War), the remaining volumes examine the activities and opinions of black abolitionists in the United States from 1830 until the end of the Civil War. In particular, these volumes focus on their reactions to African colonization and the idea of gradual emancipation, the Fugitive Slave Law, and the promise brought by emancipation during the war.

C. Peter Ripley, professor of history and black studies at The Florida State University, is editor of the Witness for Freedom and author of Slaves and Freedmen in Civil War Louisiana.
For more information about C. Peter Ripley, visit the Author Page.

"The Black Abolitionist Papers represents one of the foremost examples of the art of documentary editing, and makes accessible rare sources otherwise unavailable to most scholars."--Southern Historian