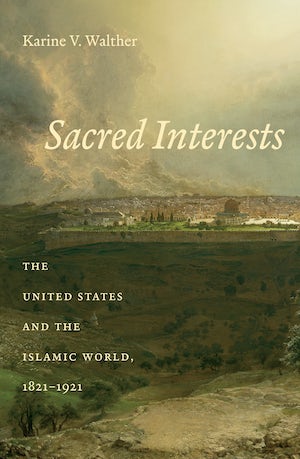 Throughout the nineteenth and early twentieth centuries, as Americans increasingly came into contact with the Islamic world, U.S. diplomatic, cultural, political, and religious beliefs about Islam began to shape their responses to world events. In Sacred Interests, Karine V. Walther excavates the deep history of American Islamophobia, showing how negative perceptions of Islam and Muslims shaped U.S. foreign relations from the Early Republic to the end of World War I.

Beginning with the Greek War of Independence in 1821, Walther illuminates reactions to and involvement in the breakup of the Ottoman Empire, the efforts to protect Jews from Muslim authorities in Morocco, American colonial policies in the Philippines, and American attempts to aid Christians during the Armenian Genocide. Walther examines the American role in the peace negotiations after World War I, support for the Balfour Declaration, and the establishment of the mandate system in the Middle East. The result is a vital exploration of the crucial role the United States played in the Islamic world during the long nineteenth century--an interaction that shaped a historical legacy that remains with us today.

Karine Walther is an Assistant Professor of History at the School of Foreign Service in Qatar. She holds a PhD in history from Columbia University, a Maîtrise and Licence in Sociology from the University of Paris VIII and a BA in American Studies from the University of Texas, Austin.
For more information about Karine V. Walther, visit the Author Page.