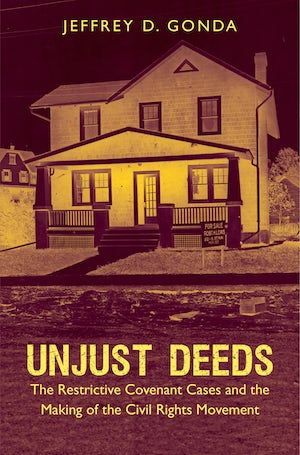 In 1945, six African American families from St. Louis, Detroit, and Washington, D.C., began a desperate fight to keep their homes. Each of them had purchased a property that prohibited the occupancy of African Americans and other minority groups through the use of legal instruments called racial restrictive covenants--one of the most pervasive tools of residential segregation in the aftermath of World War II. Over the next three years, local activists and lawyers at the NAACP fought through the nation’s courts to end the enforcement of these discriminatory contracts.

Unjust Deeds explores the origins and complex legacies of their dramatic campaign, culminating in a landmark Supreme Court victory in Shelley v. Kraemer (1948). Restoring this story to its proper place in the history of the black freedom struggle, Jeffrey D. Gonda's groundbreaking study provides a critical vantage point to the simultaneously personal, local, and national dimensions of legal activism in the twentieth century and offers a new understanding of the evolving legal fight against Jim Crow in neighborhoods and courtrooms across America.

Jeffrey D. Gonda is associate professor of history in the Maxwell School of Citizenship & Public Affairs at Syracuse University.
For more information about Jeffrey D. Gonda, visit the Author Page.