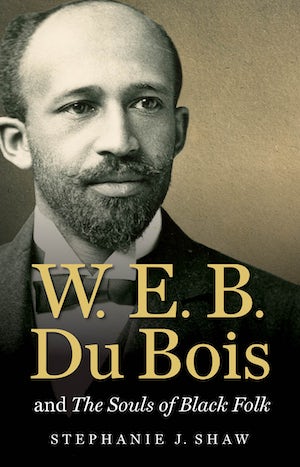 In this book, Stephanie J. Shaw brings a new understanding to one of the great documents of American and black history. While most scholarly discussions of The Souls of Black Folk focus on the veils, the color line, double consciousness, or Booker T. Washington, Shaw reads Du Bois' book as a profoundly nuanced interpretation of the souls of black Americans at the turn of the twentieth century.

Demonstrating the importance of the work as a sociohistorical study of black life in America through the turn of the twentieth century and offering new ways of thinking about many of the topics introduced in Souls, Shaw charts Du Bois' successful appropriation of Hegelian idealism in order to add America, the nineteenth century, and black people to the historical narrative in Hegel’s philosophy of history. Shaw adopts Du Bois' point of view to delve into the social, cultural, political, and intellectual milieus that helped to create The Souls of Black Folk.

Stephanie J. Shaw is professor of history at the Ohio State University and author of What a Woman Ought to Be and to Do: Black Professional Women Workers during the Jim Crow Era.
For more information about Stephanie J. Shaw, visit the Author Page.

“Opens up new vistas on how to rescue teleology from the tight grip of postmodern despair while avoiding the ghosts of nineteenth-century essentialisms.”-- Journal of American History

“Offers a deeper examination into the philosophical, religious, and intellectual aims that unfortunately have received only minimal attention in scholarship past. . . . Place[s] itself at the forefront of contemporary Du Bois scholarship.”--Journal of the North Carolina Association of Historians

“An enhanced comprehension of one of the seminal works of both U.S. and African American History.”--Louisiana History

"This book establishes Stephanie Shaw as one of the leading Du Bois scholars of her generation. She deftly combines several disciplines to produce an elegant, erudite, sophisticated, beautifully-crafted meditation on Du Bois' view of the dawn of the 20th century from the vantage point of the 21st century."--Robin D. G. Kelley, author of Africa Speaks, America Answers: Modern Jazz in Revolutionary Times

"Shaw’s ambitious and provocative book uncovers Du Bois' deliberate use of Hegel's phenomenology and philosophy of history. As Du Bois saw it, slavery and the failure of Reconstruction prevented whites as well as blacks from coming to self-consciousness and kept all Americans from the realization of freedom."--James Kloppenberg, Harvard University