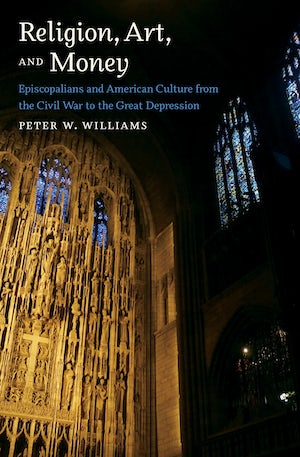 This cultural history of mainline Protestantism and American cities--most notably, New York City--focuses on wealthy, urban Episcopalians and the influential ways they used their money. Peter W. Williams argues that such Episcopalians, many of them the country's most successful industrialists and financiers, left a deep and lasting mark on American urban culture. Their sense of public responsibility derived from a sacramental theology that gave credit to the material realm as a vehicle for religious experience and moral formation, and they came to be distinguished by their participation in major aesthetic and social welfare endeavors.

Williams traces how the church helped transmit a European-inflected artistic patronage that was adapted to the American scene by clergy and laity intent upon providing moral and aesthetic leadership for a society in flux. Episcopalian influence is most visible today in the churches, cathedrals, and elite boarding schools that stand in many cities and other locations, but Episcopalians also provided major support to the formation of stellar art collections, the performing arts, and the Arts and Crafts movement. Williams argues that Episcopalians thus helped smooth the way for acceptance of materiality in religious culture in a previously iconoclastic, Puritan-influenced society.

Peter W. Williams, University Distinguished Professor Emeritus of Comparative Religion and American Studies at Miami University, is the author or coeditor of several books, including The Encyclopedia of Religion in America.
For more information about Peter W. Williams, visit the Author Page.

"Penetrating and insightful . . . provides prescient forecasts and constructive musings on the future of the Episcopal Church."--Publishers Weekly

“A fine study of the role of the American Episcopal Church between the Civil War and the Great Depression. . . . A telling reminder that there is no single narrative of American Christian engagement with American politics and culture. Recommended.”--Choice

“In a study both pioneering and fascinating, Peter W. Williams offers a cultural history linking wealth, status, and power to the aesthetic revolution that began during America's Gilded Age.”--Anglican and Episcopalian History

“{A} thorough reflection on the interaction of the spiritual and the material in American religious history.”--Fides et Historia

“The specificity of the book keeps it fascinating throughout, as the author explores the inner and outer lives of many individuals and communities.”--The Historiographer

“Peter W. Williams, an emeritus professor of religion and American Studies at Miami University in Ohio, has written a book with a sophistication that belies its simple title. Religion, Art, and Money offers a wide-ranging history of Episcopalianism in the United States between the Civil War and the Great Depression.”--The King’s Business