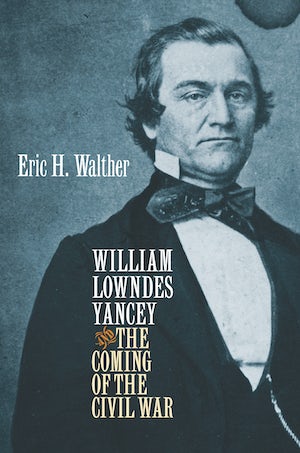 IWilliam Lowndes Yancey (1814-63) was one of the leading secessionists of the Old South. In this first comprehensive biography, Eric H. Walther examines the personality and political life of the uncompromising fire-eater.

Born in Georgia but raised in the North by a fiercely abolitionist stepfather and an emotionally unstable mother, Yancey grew up believing that abolitionists were cruel, meddling, and hypocritical. His personal journey led him through a series of mentors who transformed his political views, and upon moving to frontier Alabama in his twenties, Yancey's penchant for rhetorical and physical violence was soon channeled into a crusade to protect slaveholders' rights.

Yancey defied Northern Democrats at their national nominating convention in 1860, rending the party and setting the stage for secession after the election of Abraham Lincoln. Selected to introduce Jefferson Davis in Montgomery as the president-elect of the Confederacy, Yancey also served the Confederacy as a diplomat and a senator before his death in 1863, just short of his forty-ninth birthday.

More than a portrait of an influential political figure before and during the Civil War, this study also presents a nuanced look at the roots of Southern honor, violence, and understandings of manhood as they developed in the nineteenth century.

Eric H. Walther is associate professor of history at the University of Houston. He is author of The Fire-Eaters and The Shattering of the Union: America in the 1850s.
For more information about Eric H. Walther, visit the Author Page.

"A major contribution . . . which will be of great interest to students of the Old South and the Civil War."--North Carolina Historical Review

"Whether or not Yancey was a man obsessed, this biography should be a book possessed."--Register of the Kentucky Historical Society

"Until now . . . 'the prince of Fire-eaters' has lacked a modern biography."--Civil War History

"Gives historians their first close look at this straw man of secession. . . . The research is in impressive. . . . Scholars will thank Walther for finally giving them a full portrait of this intriguing figure."--The Historian

"Walther has not only exhaustively explored the sources for Yancey's life, but he has written a careful and judicious biography of a man known for his fiery words and actions in the nation's greatest crisis."--South Carolina Historical Magazine

"[A] valuable biography. . . . A worthwhile and well-researched addition serving libraries interested in the history of the South and the coming of the Civil War."--Choice