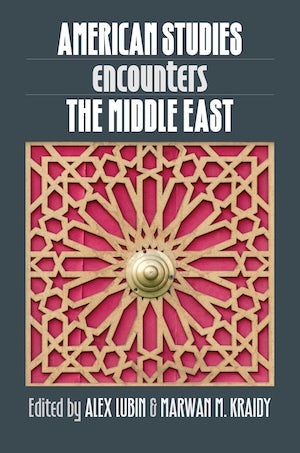 In the field of American studies, attention is shifting to the long history of U.S. engagement with the Middle East, especially in the aftermath of war in Iraq and in the context of recent Arab uprisings in protest against economic inequality, social discrimination, and political repression. Here, Alex Lubin and Marwan M. Kraidy curate a new collection of essays that focuses on the cultural politics of America’s entanglement with the Middle East and North Africa, making a crucial intervention in the growing subfield of transnational American studies. Featuring a diverse list of contributors from the United States, the Arab world, and beyond, American Studies Encounters the Middle East analyzes Arab-American relations by looking at the War on Terror, pop culture, and the influence of the American hegemony in a time of revolution.

Alex Lubin is professor of American Studies at the University of New Mexico and author of Geographies of Liberation: The Making of an Afro-Arab Political Imaginary.
For more information about Alex Lubin, visit the Author Page.

Marwan M. Kraidy is Anthony Shadid Chair in Global Media, Politics, and Culture at the Annenberg School for Communication at the University of Pennsylvania.
For more information about Marwan M. Kraidy, visit the Author Page.

"Exciting in its scope and with an impressive list of contributors, American Studies Encounters the Middle East is a genuinely transnational work, one that promises to change the ways we think about global power, cultural borders, and political identity on a broad scale."--Amy Kaplan, University of Pennsylvania

"A necessary collection that provides historical contexts for the shifting and sometimes contradictory political and cultural role of the United States in the Middle East and North Africa, American Studies Encounters the Middle East fills the void in the scholarship and points to new paths in the field of American studies."--John Carlos Rowe, University of Southern California