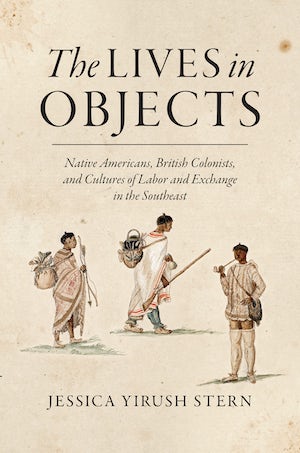 In The Lives in Objects, Jessica Yirush Stern presents a thoroughly researched and engaging study of the deerskin trade in the colonial Southeast, equally attentive to British American and Southeastern Indian cultures of production, distribution, and consumption. Stern upends the long-standing assertion that Native Americans were solely gift givers and the British were modern commercial capitalists. This traditional interpretation casts Native Americans as victims drawn into and made dependent on a transatlantic marketplace. Stern complicates that picture by showing how both the Southeastern Indian and British American actors mixed gift giving and commodity exchange in the deerskin trade, such that Southeastern Indians retained much greater agency as producers and consumers than the standard narrative allows. By tracking the debates about Indian trade regulation, Stern also reveals that the British were often not willing to embrace modern free market values. While she sheds new light on broader issues in native and colonial history, Stern also demonstrates that concepts of labor, commerce, and material culture were inextricably intertwined to present a fresh perspective on trade in the colonial Southeast.

“Sheds light on British-Native relations and further illuminates the market of the 18th-century Southeast. Highly recommended.”--Choice

“An insightful analysis of some of the earliest discussions among British settlers and native people over the terms of commodity exchange in the American Southeast.”--William and Mary Quarterly

“This well-written book deals with the exchange of goods between southeastern Indians and British colonists from their first encounter until the 1750’s.”--Legacy: A Journal of American Women Writers

“Tracing the lives of objects as well as Stern has done reveals much about the lives of people who made, exchanged, and consumed the objects, about the limits of consumer revolution, and about the intricacies of human encounters.”--The Register of the Kentucky Historical Society

"Provides scholars and students of the region with detailed evidence of the emerging world system and, in particular, how individuals shaped and contributed to the character of commodity exchange and consumption in the early American South.”--The Journal of Southern History

“Stern’s work will undoubtedly occupy a well-earned place in scholarship on Indigenous political economy for years to come.”--American Indian Quarterly