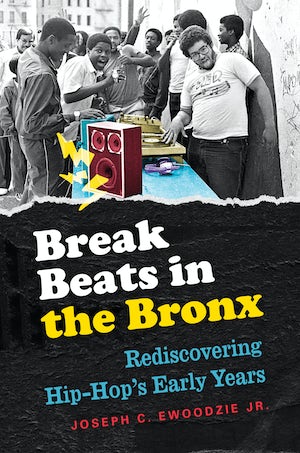 To purchase online via an independent bookstore, visit Bookshop.org
The origin story of hip-hop—one that involves Kool Herc DJing a house party on Sedgwick Avenue in the Bronx—has become received wisdom. But Joseph C. Ewoodzie Jr. argues that the full story remains to be told. In vibrant prose, he combines never-before-used archival material with searching questions about the symbolic boundaries that have divided our understanding of the music. In Break Beats in the Bronx, Ewoodzie portrays the creative process that brought about what we now know as hip-hop and shows that the art form was a result of serendipitous events, accidents, calculated successes, and failures that, almost magically, came together. In doing so, he questions the unexamined assumptions about hip-hop’s beginnings, including why there are just four traditional elements—DJing, MCing, breaking, and graffiti writing—and not others, why the South Bronx and not any other borough or city is considered the cradle of the form, and which artists besides Kool Herc, Afrika Bambaataa, and Grandmaster Flash founded the genre. Ewoodzie answers these and many other questions about hip-hop’s beginnings. Unearthing new evidence, he shows what occurred during the crucial but surprisingly underexamined years between 1975 and 1979 and argues that it was during this period that the internal logic and conventions of the scene were formed.

“An excellent balancing act of writing an academic text and still making the book accessible to the lay hip hop fan as well. Anyone can read and enjoy and learn from this book.”--Scratched Vinyl

“Ewoodzie uses new data, evidence, and collected interviews in combination with a fresh pair of eyes to distill and analyze. He then blends it with forthright prose, clear explanations, and vivacious photographs to create a history that may present as academic, but doesn’t read that way.”--IndiePicks Magazine

“Break Beats in the Bronx . . . strives to tell a ‘people’s history of hip-hop’ that emphasizes how teenagers in the South Bronx formulated creative approaches in the domain of culture, criss-crossing social and aesthetic boundaries, and eventually establishing new ones around the genre of hip-hop. . . . This is a book in dialogue both with the history of hip-hop itself as well as with sociological theories of how new cultural forms come into being. Ewoodzie does an exquisite job combining the two.”--Society for U.S. Intellectual History

“Break Beats in the Bronx promises to be an important contribution to the social and cultural history of hip-hop. With zeal, rigor, and no small amount of style, Joseph Ewoodzie illuminates the defining moments and key personalities of hip-hop’s early years before they recede into shadow.”--Adam Bradley, author of Book of Rhymes and coeditor of The Anthology of Rap

“Break Beats in the Bronx will make a significant mark on how we think about the history of race, urban space, and popular culture in New York and, more broadly, on hip-hop studies.”--Gaye Theresa Johnson, author of Spaces of Conflict, Sounds of Solidarity

“In language that neither talks down to colleagues in the academy nor prevents educated laypeople from understanding his ideas and concepts, Joseph Ewoodzie contributes to a broader tradition of pop culture research in sociology and fills a surprising vacuum in the history of hip-hop, telling the untold story about its early days in the 1970s.”--Oliver Wang, California State University, Long Beach