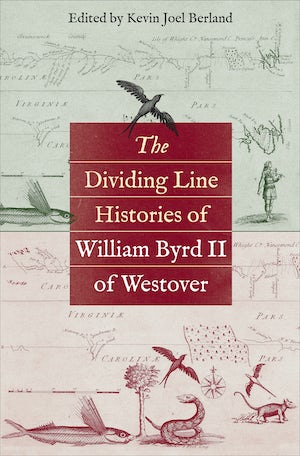 After his 1728 Virginia-North Carolina boundary expedition, Virginia planter and politician William Byrd II composed two very different accounts of his adventures. The Secret History of the Line was written for private circulation, offering tales of scandalous behavior and political misconduct, peppered with rakish humor and personal satire. The History of the Dividing Line, continually revised by Byrd for decades after the expedition, was intended for the London literary market, though not published in his lifetime. Collating all extant manuscripts, Kevin Joel Berland's landmark scholarly edition of these two histories provides wide-ranging historical and cultural contexts for both, helping to recreate the social and intellectual ethos of Byrd and his time.

Byrd enriched his narratives with material appropriated from earlier authors, many of whose works were in his library--the most extensive in the American colonies. Berland identifies for the first time many of Byrd's sources and raises the question: how reliable are histories that build silently upon antecedent texts and present borrowed material as firsthand testimony? In his analysis, Berland demonstrates the need for a new category to assess early modern history writing: the hybrid, accretional narrative.

"Berland has not only offered the finest and most detailed contextualization of Byrd's travels and their narratives, but he has also helped recover their author as a complicated man of letters."--Virginia Magazine

“This scholarly apparatus locates the literary sources for some of Byrd’s anecdotes and language, traces minor characters through the neglected local records of these borderlands, and contextualizes many of the broader concerns of early eighteenth century colonial elites. Because of Berland’s comprehensive genealogy of Byrd’s textual influences, other scholars can now make full use of the dividing line histories to imagine the intellectual and literary world of learned colonists.”--William and Mary Quarterly

“Berland has clearly set the new scholarly standard for these classic texts.”--Journal of American History

“Promises both to enrich students’ understandings of Byrd and to reinvigorate scholarly work on the Histories.”--Journal for Eighteenth-Century Studies

"Read[s] at times like a romp through rhetorical artifices used by writers from antiquity up to the times of Smollett, Fielding, and Addison."--Humanities

“An impressive, meticulously edited volume that reintroduces scholars to one of the early America’s most engaging authors. . . . Highly recommended to all scholars of colonial America.”--Journal of Southern History