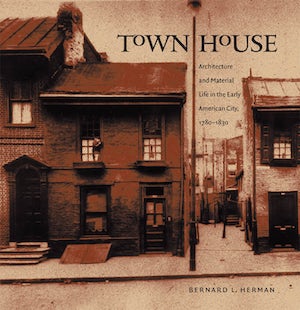 In this abundantly illustrated volume, Bernard Herman provides a history of urban dwellings and the people who built and lived in them in early America. In the eighteenth century, cities were constant objects of idealization, often viewed as the outward manifestations of an organized, civil society. As the physical objects that composed the largest portion of urban settings, town houses contained and signified different aspects of city life, argues Herman.

Taking a material culture approach, Herman examines urban domestic buildings from Charleston, South Carolina, to Portsmouth, New Hampshire, as well as those in English cities and towns, to better understand why people built the houses they did and how their homes informed everyday city life. Working with buildings and documentary sources as diverse as court cases and recipes, Herman interprets town houses as lived experience. Chapters consider an array of domestic spaces, including the merchant family's house, the servant's quarter, and the widow's dower. Herman demonstrates that city houses served as sites of power as well as complex and often conflicted artifacts mapping the everyday negotiations of social identity and the display of sociability.

Bernard L. Herman is Edward F. and Elizabeth Goodman Rosenberg Professor of Art History at the University of Delaware. He is author of three previous books, including Architecture and Rural Life in Central Delaware, 1700-1900; The Stolen House; and, with Gabrielle M. Lanier, Everyday Architecture of the Mid-Atlantic: Looking at Buildings and Landscapes.
For more information about Bernard L. Herman, visit the Author Page.

"[A] wide-ranging and amply illustrated work. . . . The book abounds in insights."--American Historical Review

"Herman's work, as it captures and restores to modern readers the ambiguity and lyricism of an earlier built environment, continues to show us how valuable such studies are, and makes that scholarship especially accessible, exciting, and inviting."--Journal of the Early Republic

"Herman's book has been recognized as exemplary in the field of vernacular architecture. . . . Architectural and urban historians should find Town House illuminating. . . . He has provided a solid foundation for further investigation of the ties between historical forces and material life."--Journal of the Society of Architectural Historians

"Town House presents a rich, detailed picture of the spatial, material, and cultural life of American cities in the late eighteenth and early nineteenth centuries."--Technology and Culture

"Town House will definitely appeal to connoisseurs of historic architecture, who will find it an arresting, fascinating, and, in some ways, original book. General readers with a passing interest in the subject also will be rewarded. . . . This book effectively delivers the sobering lesson that no matter the era, houses do not lie."--Alabama Mobile Register

"Herman's new book, Town House: Architecture and Material Life in the Early American City, 1780-1830, is a most remarkable guided tour of the early American city in the late eighteenth and early nineteenth centuries. . . . Herman has dramatically extended the boundaries of our knowledge of the early American city, has provided an important model for future studies, and has made a fresh and compelling case for the scholarly significance of material culture."--Winterthur Portfolio