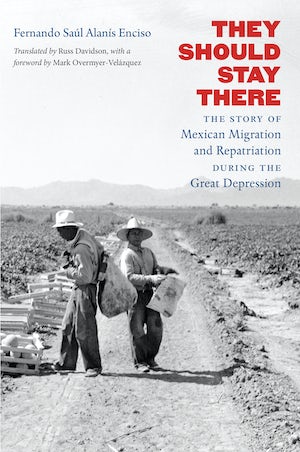 Here, for the first time in English—and from the Mexican perspective—is the story of Mexican migration to the United States and the astonishing forced repatriation of hundreds of thousands of people to Mexico during the worldwide economic crisis of the Great Depression. While Mexicans were hopeful for economic reform following the Mexican revolution, by the 1930s, large numbers of Mexican nationals had already moved north and were living in the United States in one of the twentieth century’s most massive movements of migratory workers. Fernando Saúl Alanís Enciso provides an illuminating backstory that demonstrates how fluid and controversial the immigration and labor situation between Mexico and the United States was in the twentieth century and continues to be in the twenty-first.

When the Great Depression took hold, the United States stepped up its enforcement of immigration laws and forced more than 350,000 Mexicans, including their U.S.-born children, to return to their home country. While the Mexican government was fearful of the resulting economic implications, President Lázaro Cárdenas fostered the repatriation effort for mostly symbolic reasons relating to domestic politics. In clarifying the repatriation episode through the larger history of Mexican domestic and foreign policy, Alanís connects the dots between the aftermath of the Mexican revolution and the relentless political tumult surrounding today’s borderlands immigration issues.

Russ Davidson is curator emeritus of Latin American and Iberian Collections and translator of many books.
For more information about Russ Davidson, visit the Author Page.

“This fine-grained history of the state in action provides critical context for social historians of Mexican migration during the 1930s. . . . The quantity of research and depth of analysis mark They Should Stay There as a significant historiographical contribution, and just as important, a bridge between a towering Mexican historian and the English-speaking world.”--Journal of Arizona History

"The history examined by Fernando Alanís Encisco, the foremost scholar of Mexican emigration history, in They Should Stay There is very much alive today. Today, as many Mexican and other immigrants in the United States live vulnerably and in fear of deportation, we would do well to remember the lessons from the 1930s, a period when the U.S. government forced hundreds of thousands of ethnic Mexicans--many of them U.S. citizens--back across the border in what became the largest 'repatriation' movement in U.S. history. . . . This is a history of the assertion, development, and refinement of centralized, well-focused, and often quite harsh government power subject to minimal judicial oversight.”--From the foreword by Mark Overmyer-Velázquez, University of Connecticut