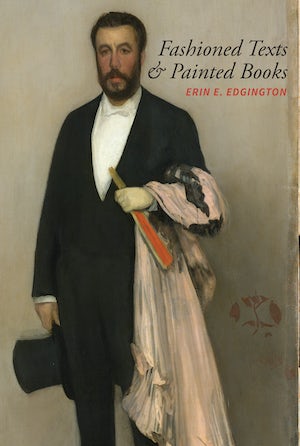 Fashioned Texts and Painted Books examines the folding fan’s multiple roles in fin-de-siècle and early twentieth-century French literature. Focusing on the fan’s identity as a symbol of feminine sexuality, as a collectible art object, and, especially, as an alternative book form well suited to the reception of poetic texts, the study highlights the fan’s suitability as a substrate for verse, deriving from its myriad associations with coquetry and sex, flight, air, and breath. Close readings of Stéphane Mallarmé’s éventails of the 1880s and 1890s and Paul Claudel’s Cent phrases pour éventails (1927) consider both text and paratext as they underscore the significant visual interest of this poetry.

Works in prose and in verse by Octave Uzanne, Guy de Maupassant, and Marcel Proust, along with fan leaves by Edgar Degas, Édouard Manet, Berthe Morisot, and Paul Gauguin, serve as points of comparison that deepen our understanding of the complex interplay of text and image that characterizes this occasional subgenre. Through its interrogation of the correspondences between form and content in fan poetry, this study demonstrates that the fan was, in addition to being a ubiquitous fashion accessory, a significant literary and art historical object straddling the boundary between East and West, past and present, and high and low art.

“[The] book undoubtedly contributes profound insight to the conversation surrounding nineteenth-century aesthetics in ways that might be applied to other objects of the time; yet, more than this, [Edgington’s] analyses attending to both the plastic and literary aspects of the fan redeem the object from its ‘popular’ status and elevate the fan to an item of key importance within late-nineteenth and early-twentieth century poetics. . . . Readers will close the volume wholly persuaded of the fan’s importance to our understanding of nineteenth century culture, print history, and poetics.”--Modern Language Notes

“Those interested in the less-studied poetry of Mallarmé and Claudel will find close analyses of poems and sustained readings. Those concerned with the representation and history of fashion will find material concerning the fan’s place within those fields. Scholars of material culture, and, in particular, the luxury book will find useful analogies in the discussions of luxury ‘poeticized’ fan. The ambition to work at the crossroads of literature, art, fashion, and material culture is laudable, and the fan, so richly significant in the nineteenth century, merits the attention Edgington gives it.”--Nineteenth-Century French Studies

“Fashioned Text & Painted Books, offers a nuanced look at the special relationship between fashion, art, and literature and provides an interdisciplinary link between the three. Edgington . . . has produced the perfect book for the fashion historian who wants to think outside the box.”--The Journal of Dress History