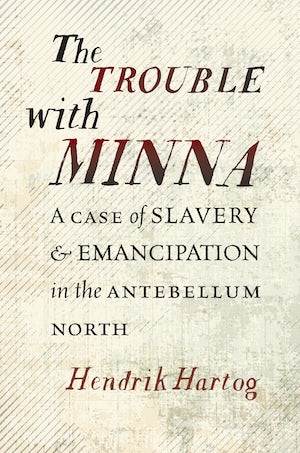 In this intriguing book, Hendrik Hartog uses a forgotten 1840 case to explore the regime of gradual emancipation that took place in New Jersey over the first half of the nineteenth century. In Minna’s case, white people fought over who would pay for the costs of caring for a dependent, apparently enslaved, woman. Hartog marks how the peculiar language mobilized by the debate—about care as a “mere voluntary courtesy”—became routine in a wide range of subsequent cases about “good Samaritans.” Using Minna’s case as a springboard, Hartog explores the statutes, situations, and conflicts that helped produce a regime where slavery was usually but not always legal and where a supposedly enslaved person may or may not have been legally free.

In exploring this liminal and unsettled legal space, Hartog sheds light on the relationships between moral and legal reasoning and a legal landscape that challenges simplistic notions of what it meant to live in freedom. What emerges is a provocative portrait of a distant legal order that, in its contradictions and moral dilemmas, bears an ironic resemblance to our own legal world.

Hendrik Hartog is Class of 1921 Bicentennial Professor in the History of American Law and Liberty, Emeritus at Princeton University and author of Public Property and Private Power.
For more information about Hendrik Hartog, visit the Author Page.

“Hartog resists the impulse prevalent in the historiography of northern emancipation to keep moral score; he neither celebrates nor castigates gradual abolitionism. Rather, Hartog follows the smoke of litigation to find fires that shed light on fraught human experiences. Subsequent historians of northern slavery’s terminal era will learn from his thoughtful approach to a legal regime designed paradoxically to dismantle and to maintain the status quo.”--Journal of the Civil War Era

“Contributes significantly to our understanding of how the law worked during the emancipation era.”--Journal of American History

“Hartog’s line-blurring has taken a novel tack by demonstrating how antebellum slavery in New Jersey was hardly the monolithic ‘unfreedom’ we have come to accept . . . . The Trouble with Minna makes a robust addition to a historiographical field which ultimately reveals the historical coexistence and codependence of capitalism and slavery.”--Law & Social Inquiry

“Hartog masterfully balances all of these different stories, extracting from them the key details that highlight the peculiarities of gradual emancipation. . . . An illuminating study of how the law broke down binary distinctions of those who had gained freedom and those who had not.”--H-Net Reviews

“This remarkably provocative, thoughtful, and original work is marked by Hartog’s gift for storytelling, his mastery of the law, and his exquisitely nuanced appreciation for the quirks of human motivation as shaped by the codes of American legal culture.”--Amy Dru Stanley, University of Chicago

“Using his trademark combination of brilliant doctrinal reasoning and intense archival research, Hartog has drawn insights that will help reshape scholarship on slavery and advance our understanding of legal institutions in the nineteenth-century United States.”—Rebecca J. Scott, University of Michigan 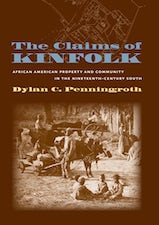