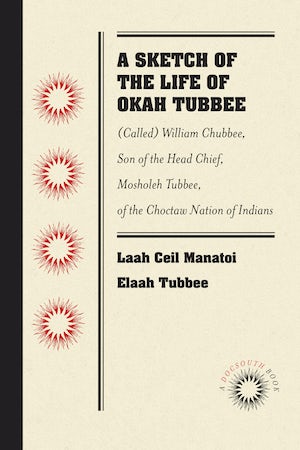 A Sketch of the Life of Okah Tubbee, published in 1852, begins with testimonials regarding Okah Tubbee's flute-playing abilities and with a lightly edited version of Lewis Allen's "Essay Upon the Indian Character" from the earlier edition of Tubbee’s narrative, as well as the so-called Indian Covenant "between the Six Nations and the Choctaws." Tubbee’s narrative begins with brief recollections of his father and Tubbee's childhood with his "unnatural mother." Tubbee's visit to Choctaw Indians in Alexandria is described before his apprenticeship to the cruel blacksmith Mr. Russell, and his subsequent apprenticeship to Dr. A.P. Merrill, leading to his desire to become an "Indian Doctor.” Tubbee's details his travels and voyages by steamboat, first as a musician with the Louisiana Volunteers and later on his own. Towards the end of his narrative, Tubbee expresses a desire to let his wife, Laah Ceil, speak for herself.

In this final, additional section, Laah Ceil describes her birth, her education, her Christian convictions, and the manner in which she met and married Tubbee. She also recounts their travels together and their advocacy "in behalf of the Indians" and against forced relocation. The Sketch concludes with an original poem by Laah Ceil and a collection of letters, documents, and vouchers attesting to Okah Tubbee's identity and his medical skill.

Laah Ceil was born in New York in 1817; treaties for the removal of Delaware Indians led to her family’s relocation to Missouri and ultimately to an area near the Kansas-Missouri border where she met Warner McCary a/k/a Okah Tubbee. Encouraged by Reverend Lewis Allen, a published author and traveling lecturer for the temperance movement, Laah Ceil recorded a narrative of her husband's life in 1848.
For more information about Laah Ceil Manatoi Elaah Tubbee, visit the Author Page.