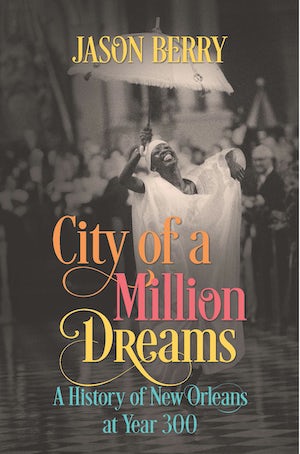 In 2015, the beautiful jazz funeral in New Orleans for composer Allen Toussaint coincided with a debate over removing four Confederate monuments. Mayor Mitch Landrieu led the ceremony, attended by living legends of jazz, music aficionados, politicians, and everyday people. The scene captured the history and culture of the city in microcosm--a city legendary for its noisy, complicated, tradition-rich splendor. In City of a Million Dreams, Jason Berry delivers a character-driven history of New Orleans at its tricentennial. Chronicling cycles of invention, struggle, death, and rebirth, Berry reveals the city's survival as a triumph of diversity, its map-of-the-world neighborhoods marked by resilience despite hurricanes, epidemics, fires, and floods.

Berry orchestrates a parade of vibrant personalities, from the founder Bienville, a warrior emblazoned with snake tattoos; to Governor William C. C. Claiborne, General Andrew Jackson, and Pere Antoine, an influential priest and secret agent of the Inquisition; Sister Gertrude Morgan, a street evangelist and visionary artist of the 1960s; and Michael White, the famous clarinetist who remade his life after losing everything in Hurricane Katrina. The textured profiles of this extraordinary cast furnish a dramatic narrative of the beloved city, famous the world over for mysterious rituals as people dance when they bury their dead.

"A hypnotic biography of a unique American city. . . . City of a Million Dreams is history writing at its best, in which high-caliber prose manages to be as interesting as its subject."--Foreword Reviews

“Every major city should have such a guide to its past.”--Kirkus Reviews, starred review

"A bold, witty, character-driven history of New Orleans, just in time for its tricentennial."--Larry Blumenfeld, The Wall Street Journal

"Captures the reader's attention with a cavalcade of astoundingly detailed accounts of the exploits and adventures of a cornucopia of outstanding people who have left an enduring mark on New Orleans and the conflicts that have forged its distinctive urban culture."--Ed Conroy, The Houston Chronicle

"A powerful narrative about the making of a place, against all odds."--January Magazine

"Berry not only traces . . . overlaps of sound and spectacle; he uses overlapping narratives. . . . We see New Orleans, after another of its near-death experiences, still stubbornly not knowing how to die when it ought to." --Garry Wills, New York Review of Books