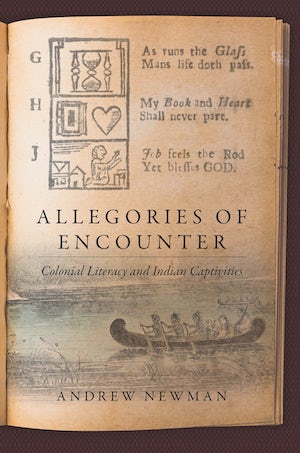 Presenting an innovative, interdisciplinary approach to colonial America's best-known literary genre, Andrew Newman analyzes depictions of reading, writing, and recollecting texts in Indian captivity narratives. While histories of literacy and colonialism have emphasized the experiences of Native Americans, as students in missionary schools or as parties to treacherous treaties, captivity narratives reveal what literacy meant to colonists among Indians. Colonial captives treasured the written word in order to distinguish themselves from their Native captors and to affiliate with their distant cultural communities. Their narratives suggest that Indians recognized this value, sometimes with benevolence: repeatedly, they presented colonists with books.

In this way and others, Scriptures, saintly lives, and even Shakespeare were introduced into diverse experiences of colonial captivity. What other scholars have understood more simply as textual parallels, Newman argues instead may reflect lived allegories, the identification of one’s own unfolding story with the stories of others. In an authoritative, wide-ranging study that encompasses the foundational New England narratives, accounts of martyrdom and cultural conversion in New France and Mohawk country in the 1600s, and narratives set in Cherokee territory and the Great Lakes region during the late eighteenth century, Newman opens up old tales to fresh, thought-provoking interpretations.

“Provocative and original. . . . Newman turns an ethnographic gaze on the literacy beliefs and practices of the settler-colonists, reenvisioning how those practices sustained them even when their textual access was mediated by their Native American captors.”--Choice Reviews

“Well argued and written . . . Highly recommended as an interdisciplinary academic text that offers one example of a nuanced method of literary historicism.”--Eighteenth-Century Studies

"This especially timely work distills a decade of groundbreaking research in early American book studies and provides a new approach for reading captivity narratives, a genre long held to be the wellspring of a truly 'American' literature. Newman fruitfully reimagines early American stories of captivity as 'literacy events,' demonstrating how this genre continually reenacts the 'primal scene' of American colonialism as an allegory pitting story against discourse, and narrative present against typological past."--Phillip H. Round, University of Iowa

"In this fascinating study, Andrew Newman explores how captives ranging from Mary Rowlandson to John Marrant drew meaning from literacy and literature as they reflected on their own experiences and used citations and allusions to interpret those experiences for a broader audience. Historians will be intrigued by Newman's insightful new take on an essential topic in early American studies."--Christina Snyder, Pennsylvania State University

"With clear-eyed skepticism and wry prose, Andrew Newman compellingly reads allegory, typology, allusion, and onomastics, not as mere figures of speech, but as historical agents in the shaping of colonialism and its enactors. At a time when critics and historians are rethinking the very tenets of scholarly judgment, Allegories of Encounter shows how much is to be gained from revisiting an earlier era, when literary allusion itself constituted a sometimes wishful, sometimes violent act of cultural boundary-making. Captivity didn’t just yield literature in the colonial era--it was a literary experience for all concerned."--Matt Cohen, University of Nebraska-Lincoln