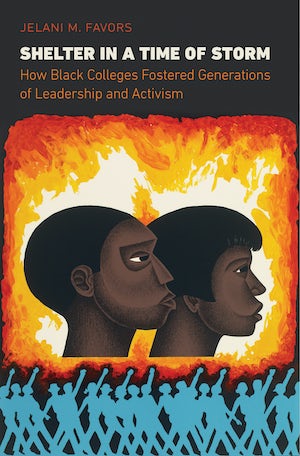 For generations, historically Black colleges and universities (HBCUs) have been essential institutions for the African American community. Their nurturing environments not only provided educational advancement but also catalyzed the Black freedom struggle, forever altering the political destiny of the United States. In this book, Jelani M. Favors offers a history of HBCUs from the 1837 founding of Cheyney State University to the present, told through the lens of how they fostered student activism.

Favors chronicles the development and significance of HBCUs through stories from institutions such as Cheyney State University, Tougaloo College, Bennett College, Alabama State University, Jackson State University, Southern University, and North Carolina A&T. He demonstrates how HBCUs became a refuge during the oppression of the Jim Crow era and illustrates the central role their campus communities played during the civil rights and Black Power movements. Throughout this definitive history of how HBCUs became a vital seedbed for politicians, community leaders, reformers, and activists, Favors emphasizes what he calls an unwritten "second curriculum" at HBCUs, one that offered students a grounding in idealism, racial consciousness, and cultural nationalism.

"This vivid exploration of an important topic is a must-read for anyone interested in higher education and HBCUs in particular."--Library Journal, starred review

"Jelani M. Favors has written the most profound, thorough, and nuanced work ever on the role of historically Black colleges and universities (HBCUs) in educating and developing generations of the Black student activists who shaped and reshaped the long struggle for freedom and equality. Reading his book awakens us to the fact that Black freedom fighters were not sudden creations of various social movements, but products of long-standing intellectual ideas and cultural norms cultivated within the walls of HBCUs. Anyone curious about the historical wellspring of Black student activism must read this lucid and painstaking presentation that traces the academic and social molding of generations of activists from the founding of the first HBCU to the apex of the Black Power movement. No student of the long freedom struggle can overlook Shelter in a Time of Storm."--James D. Anderson, author of The Education of Blacks in the South, 1860–1935

"I have been waiting for a prodigious researcher and storyteller to reconstruct what has never been fully reconstructed: the story of historically Black colleges and universities’ influence on Black activism. In Shelter in a Time of Storm, Jelani Favors has told that story, revealing how HBCUs have been the most fertile womb of Black activism in America throughout their history."--Ibram X. Kendi, National Book Award–winning author of Stamped from the Beginning: The Definitive History of Racist Ideas in America

"Dramatically countering existing narratives, this book conveys the diversity of political thought and leadership at HBCUs, illustrating the versatility of Black institutions. With lively prose, this cross-section of HBCUs, viewed from Reconstruction through the Nadir through the birth of the modern civil rights movement, provides great insight on the evolution of possibilities that revealed themselves to Black people."--Stefan Bradley, Loyola Marymount University

"Jelani Favors’s superb account of the long history of activism, idealism, and race consciousness at historically Black colleges and universities will forever change the way we think about Black higher education in the United States. A brilliant study, Dr. Favors shows how generations of Black students and faculty forged ‘blueprints for Black liberation’ that defied the state’s plans for social control and submission. Truly shelters in the storm, Black campuses nurtured minds and protected bodies from the ravages of American racism. Jelani Favors has finally given them much-deserved scholarly attention."--Martha Biondi, author of The Black Revolution on Campus

"Enlightening and fascinating, Shelter in a Time of Storm examines the role of the forgotten or at best misinterpreted leadership at Black colleges."--Carlton E. Wilson, North Carolina Central University