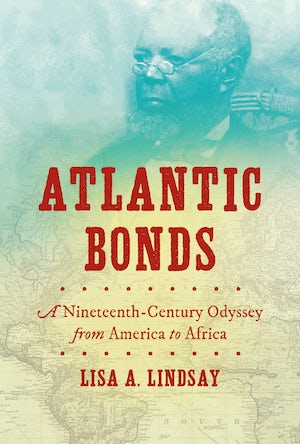 A decade before the American Civil War, James Churchwill Vaughan (1828–1893) set out to fulfill his formerly enslaved father’s dying wish that he should leave America to start a new life in Africa. Over the next forty years, Vaughan was taken captive, fought in African wars, built and rebuilt a livelihood, and led a revolt against white racism, finally becoming a successful merchant and the founder of a wealthy, educated, and politically active family. Tracing Vaughan’s journey from South Carolina to Liberia to several parts of Yorubaland (present-day southwestern Nigeria), Lisa Lindsay documents this “free” man’s struggle to find economic and political autonomy in an era when freedom was not clear and unhindered anywhere for people of African descent.

In a tour de force of historical investigation on two continents, Lindsay tells a story of Vaughan’s survival, prosperity, and activism against a seemingly endless series of obstacles. By following Vaughan’s transatlantic journeys and comparing his experiences to those of his parents, contemporaries, and descendants in Nigeria and South Carolina, Lindsay reveals the expansive reach of slavery, the ambiguities of freedom, and the surprising ways that Africa, rather than America, offered new opportunities for people of African descent.

Lisa A. Lindsay is Bowman and Gordon Gray Distinguished Term Professor of History at the University of North Carolina at Chapel Hill.
For more information about Lisa A. Lindsay, visit the Author Page.

“An intriguing and important look into the lasting effects of the Atlantic slave trade and the experiences of at least one African American who took advantage of the early nineteenth-century back-to-Africa movement.”--H-Net

“[A] meticulously researched, highly engaging narrative. . . . [Lindsay] expertly weaves the story of one family with the larger changes both African Americans and Africans faced during the 19th century. Highly recommended.”--Choice

“Serves as a useful corrective to understandings of African diasporic identity that rely on the uncomplicated mythologies of cultural nationalism.”--Journal of Social History

“Offers readers two stories: an intimate portrait of one man's search for home and a greater survey of life on both sides of the Atlantic in the nineteenth century.”--North Carolina Historical Review

“The density and breadth of Lindsay's research is as impressive as her account of the world of James Churchwill Vaughn. . . . Carefully crafted . . . . Stimulating and informative.”--Journal of American History