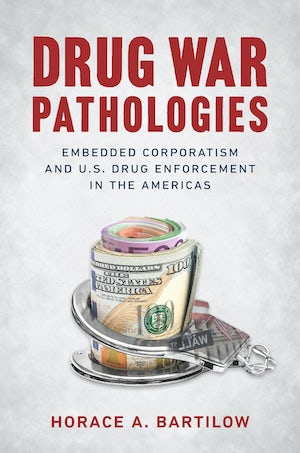 In this book, Horace Bartilow develops a theory of embedded corporatism to explain the U.S. government’s war on drugs. Stemming from President Richard Nixon’s 1971 call for an international approach to this “war,” U.S. drug enforcement policy has persisted with few changes to the present day, despite widespread criticism of its effectiveness and of its unequal effects on hundreds of millions of people across the Americas. While researchers consistently emphasize the role of race in U.S. drug enforcement, Bartilow’s empirical analysis highlights the class dimension of the drug war and the immense power that American corporations wield within the regime.

Drawing on qualitative case study methods, declassified U.S. government documents, and advanced econometric estimators that analyze cross-national data, Bartilow demonstrates how corporate power is projected and embedded—in lobbying, financing of federal elections, funding of policy think tanks, and interlocks with the federal government and the military. Embedded corporatism, he explains, creates the conditions by which interests of state and nonstate members of the regime converge to promote capital accumulation. The subsequent human rights repression, illiberal democratic governments, antiworker practices, and widening income inequality throughout the Americas, Bartilow argues, are the pathological policy outcomes of embedded corporatism in drug enforcement.

Horace A. Bartilow, associate professor of political science at the University of Kentucky, is the author of The Debt Dilemma.


For more information about Horace A. Bartilow, visit the Author Page.

“In his provocative new book, Horace A. Bartilow delves deeply into the role of class and corporate America in the design and continuing present-day implementation of the failed and increasingly counterproductive U.S.-led ‘war on drugs’ in Latin America and around the globe. A fascinating and entertaining read that will appeal to students and specialists alike.”—Bruce M. Bagley, University of Miami

“A passionate social scientist’s answer to the debate about the war on drugs, Drug War Pathologies addresses a large-scale policy issue that presses on the minds of hundreds of millions of people in dozens of countries--the war on drugs and the nature of illiberal democracy. Horace Bartilow attacks the question with scientific sophistication, exhaustive research, and élan, painting a sinister picture of how power is used at the highest levels. The arguments are controversial, perhaps even explosive, and will make this a must-read book for years to come.”--Kendall Stiles, Brigham Young University

“Makes an important contribution to debates on contemporary U.S. policy toward Latin America and the implications of the drug war for security and democracy in the region."--Enrique Desmond Aries, Baruch College, CUNY