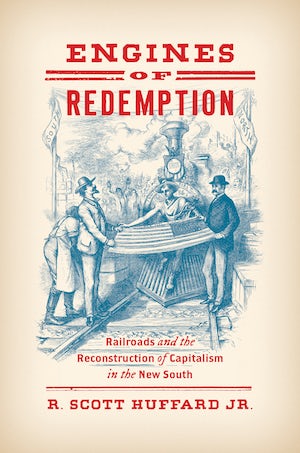 After the upheavals of the Civil War and Reconstruction shattered the plantation economy of the Old South, white southerners turned to the railroad to reconstruct capitalism in the region. Examining the rapid growth, systemization, and consolidation of the southern railroad network, R. Scott Huffard Jr. demonstrates how economic and political elites used the symbolic power of the railroad to proclaim a New South had risen. The railroad was more than just an economic engine of growth; it was a powerful symbol of capitalism’s advance.

However, as the railroad spread across the region, it also introduced new dangers and anxieties. White southerners came to fear the railroad would speed an upending of the racial order, epidemics of yellow fever, train wrecks, violent robberies, and domination by corporate monopolies. To complete the reconstruction of capitalism, railroad corporations and their allies had to sever the negative aspects of railroading from capitalism’s powers and deny the railroad’s transformative powers to black southerners. This study of the New South’s experience with the growing railroad network provides valuable insights into the history of capitalism--how it evolves, expands, and overcomes resistance.

"There are no more powerful institutions in southern political history than interstate railroads. With an eye towards contemporary implications, Huffard shows us how the railroad octopus contributed to the many ills of the postwar South, including white supremacy, infectious disease, and economic colonialism. With a novelist’s eye for detail, he deftly combines an impressive array of historical sources unused by this generation of scholars."--Scott Reynolds Nelson, University of Georgia

"Huffard examines railroad ‘narratives, mentalities, and encounters’ to recover the contested history of capitalism’s triumph--a history that he contends has been erased by the logic of capitalism itself."--Amy G. Richter, Clark University