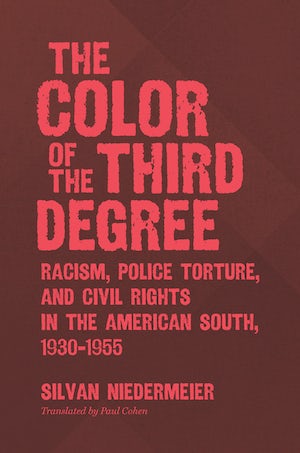 Available for the first time in English, The Color of the Third Degree uncovers the still-hidden history of police torture in the Jim Crow South. Based on a wide array of previously neglected archival sources, Silvan Niedermeier argues that as public lynching decreased, less visible practices of racial subjugation and repression became central to southern white supremacy. In an effort to deter unruly white mobs, as well as oppress black communities, white southern law officers violently extorted confessions and testimony from black suspects and defendants in jail cells and police stations to secure speedy convictions. In response, black citizens and the NAACP fought to expose these brutal practices through individual action, local organizing, and litigation. In spite of these efforts, police torture remained a widespread, powerful form of racial control and suppression well into the late twentieth century.

The first historical study of police torture in the American South, Niedermeier draws attention to the willing acceptance of violent coercion by prosecutors, judges, and juries, and brings to light the deep historical roots of police violence against African Americans, one of the most urgent and distressing issues of our time.

“This book explores the contested practice of police torture in the period between the heyday of lynching violence (1890–1930) and the civil rights era (1955–1960s). Drawing on NAACP records, FBI files, court documents, newspapers, and individual archival collections, Niedermeier . . . offers a complex history of both change and continuity. . . . Provides a dense, detailed, but accessible account of a crucial but often overlooked subject.”--CHOICE

“An important and incredibly timely expose into the roots of modern state violence. . . . Like many historical issues of race and oppression in the United States, the story of police violence is still a very open book, and Niedermeier’s work is vital to our understanding of its roots.”--Criminal Law and Criminal Justice Books

“Drawing on a wide array of previously neglected archival sources, Niedermeier argues that, in an effort to deter unruly white mobs and to control black communities, law ofﬁcers in the US Jim Crow South violently extorted confessions and testimony from black suspects and defendants to secure speedy convictions. He ﬁnds that in response, black citizens and the NAACP fought to expose these practices through individual action, local organizing, and litigation, but nonetheless, torture remained a widespread, powerful form of racial control and suppression.”--Law & Social Inquiry

“A timely and important exposé of police torture. . . . Niedermeier’s call to historicize police torture is of immense value to all scholars and students of African American, civil rights, and legal history.”--Journal of Southern History

"Based on an impressive array of original primary sources, Niedermeier provides historical context for current debates about racial profiling and police brutality that tragically still embody racism in the United States. This book will start a conversation about the history of police violence not only in the South, but across the United States, to help us understand why this issue remains at the forefront of civil rights activism today."--Steve Estes, Sonoma State University

"With theoretical sophistication, Niedermeier explores the surprisingly unexamined history of police torture and forced confessions in the Jim Crow South and details the frustrated attempts of defendants, activists, and, eventually, the federal government to expose and end the practice. This salient and timely book should be read widely."--Amy Louise Wood, author of Lynching and Spectacle: Witnessing Racial Violence in America, 1890–1940