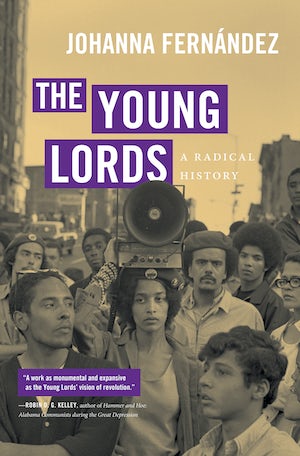 Against the backdrop of America’s escalating urban rebellions in the 1960s, an unexpected cohort of New York radicals unleashed a series of urban guerrilla actions against the city’s racist policies and contempt for the poor. Their dramatic flair, uncompromising vision, and skillful ability to link local problems to international crises riveted the media, alarmed New York’s political class, and challenged nationwide perceptions of civil rights and black power protest. The group called itself the Young Lords.

Utilizing oral histories, archival records, and an enormous cache of police records released only after a decade-long Freedom of Information Law request and subsequent court battle, Johanna Fernández has written the definitive account of the Young Lords, from their roots as a street gang to their rise and fall as a political organization. Led predominantly by poor and working-class Puerto Rican youth, and consciously fashioned after the Black Panther Party, the Young Lords confronted race and class inequality and questioned American foreign policy. Their imaginative, irreverent protests and media conscious tactics won significant reforms and exposed U.S. mainland audiences to the country’s quiet imperial project in Puerto Rico. In riveting style, Fernández demonstrates how the Young Lords redefined the character of protest, the color of politics, and the cadence of popular urban culture in the age of great dreams.

Johanna Fernández is assistant professor of history at Baruch College of the City University of New York and editor of Writing on the Wall: Selected Prison Writings of Mumia Abu-Jamal.
For more information about Johanna Fernández, visit the Author Page.

"In this remarkable book, historian Johanna Fernández tells us that the children of Puerto Rican migration to the U.S. colonizer’s continent developed a ‘second sight,’ experiencing poverty and discrimination while possessing knowledge of Puerto Rico as a U.S. colony and U.S. imperialism, making their organization, the Young Lords, a powerful force. Challenging Latino antiblack racism and machismo and the church, and using intense community organizing, they not only brought liberation and class consciousness to Puerto Ricans but also infused the social movements of the 1960s with solidarity, launching the famed Rainbow Coalition. This is history writing at its best, rigorously researched yet powerful and moving, often poetic. And it is not ‘just history,’ but rather profoundly a cautionary tale of the present and the future given the limitation of social revolution within the powerful settler-colonial state that is the United States."--Roxanne Dunbar-Ortiz, author of An Indigenous Peoples’ History of the United States

"A groundbreaking and meticulous account of one of the most influential radical groups in 1960s America. After decades of painstaking research and countless interviews with actual participants, Johanna Fernández has produced a vivid chronicle of the unheralded achievements, the painful failures, and the continuing legacy of the New York Young Lords during those few brief years that we sought to change the world and captured the imagination of a city."--Juan González, Richard D. Heffner Professor of Communications and Public Policy, Rutgers University, and former Young Lords Minister of Education

"Thanks to Johanna Fernández’s beautifully narrated and deeply researched account of the Young Lords Party, a glaring gap in our history of the tumultuous 1960s and 1970s finally has been filled. Fernández’s rich recovery of the ideas and actions of the YLP shines much-needed light on the true complexity of this moment when so many worked so tirelessly to build a more just and equitable America as well as a truly free Puerto Rico. It is a must-read."--Heather Ann Thompson, Pulitzer Prize–winning author of Blood in the Water: The Attica Prison Uprising of 1971 and Its Legacy