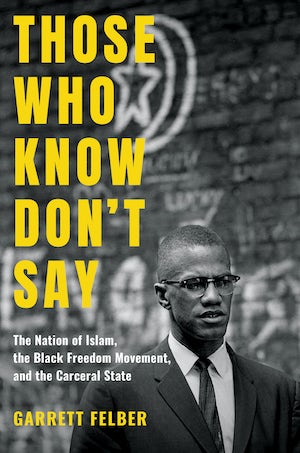 Challenging incarceration and policing was central to the postwar Black Freedom Movement. In this bold new political and intellectual history of the Nation of Islam, Garrett Felber centers the Nation in the Civil Rights Era and the making of the modern carceral state. In doing so, he reveals a multifaceted freedom struggle that focused as much on policing and prisons as on school desegregation and voting rights. The book examines efforts to build broad-based grassroots coalitions among liberals, radicals, and nationalists to oppose the carceral state and struggle for local Black self-determination. It captures the ambiguous place of the Nation of Islam specifically, and Black nationalist organizing more broadly, during an era which has come to be defined by nonviolent resistance, desegregation campaigns, and racial liberalism.

By provocatively documenting the interplay between law enforcement and Muslim communities, Felber decisively shows how state repression and Muslim organizing laid the groundwork for the modern carceral state and the contemporary prison abolition movement which opposes it. Exhaustively researched, the book illuminates new sites and forms of political struggle as Muslims prayed under surveillance in prison yards and used courtroom political theater to put the state on trial. This history captures familiar figures in new ways--Malcolm X the courtroom lawyer and A. Philip Randolph the Harlem coalition builder--while highlighting the forgotten organizing of rank-and-file activists in prisons such as Martin Sostre. This definitive account is an urgent reminder that Islamophobia, state surveillance, and police violence have deep roots in the state repression of Black communities during the mid-20th century.

Garrett Felber is assistant professor of history at the University of Mississippi.
For more information about Garrett Felber, visit the Author Page.

“Shows that police departments steeped in cultures of bigotry, and a judicial system that promotes punishment over rehabilitation, were harsh in responding to black protest movements, many of them led by the Nation of Islam. . . . An impressive academic investigation and an appealing contribution to black American history.”--Foreword

“Felber . . . examines how the Nation of Islam, and its growth during the civil rights era, impacted prisons, policing, school desegregation, and voting rights. Drawing on history, law, sociology, and politics, Felber looks at how the Nation impacted the modern carceral state. . . . One can find many books on Malcolm X and the Nation of Islam, but Felber's is valuable for its interdisciplinary approach to possible solutions for the carceral state in the 21st century.”--CHOICE

“Felber’s political and intellectual history of the Nation of Islam centers the Nation in the US Civil Rights Era and the making of the modern carceral state, seeking to capture the ambiguous place of the Nation—and Black nationalist organizing more broadly—during an era which has come to be deﬁned by nonviolent resistance, desegregation campaigns, and racial liberalism.”--Law & Social Inquiry

"Richly researched and told with elegance and sophistication, this stunning book is the definitive account of the Nation of Islam’s political activism. Felber provides a revelatory look at the urgency and far-reaching influence of this controversial, pivotal Black nationalist organization."--Dan Berger, author of Captive Nation: Black Prison Organizing in the Civil Rights Era

"Those Who Know Don’t Say is an archivally rich, bicoastal tale of the central role of Black nationalists in challenging prisons and police in the postwar era. Garrett Felber’s portrayal of the Nation of Islam stands out as an original contribution for showing how the organization’s leaders, contrary to popular myth, mobilized politically on city streets, in courts, and behind prison walls to challenge police brutality and prisoner abuse years before the War on Crime and mass incarceration began. This is a must read."--Khalil Gibran Muhammad, author of The Condemnation of Blackness: Race, Crime, and the Making of Modern Urban America

"Garrett Felber's powerful new book on the Nation of Islam details, with nuance and rigor, an important and often-overlooked chapter in the narrative of the twentieth-century Black freedom movement, expanding upon how we understand Black politics, Black liberation, and the movement for prison abolition today."--Barbara Ransby, author of Making All Black Lives Matter: Reimagining Freedom in the Twenty-First Century