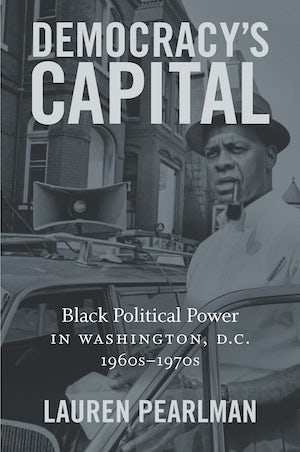 From its 1790 founding until 1974, Washington, D.C.--capital of "the land of the free"--lacked democratically elected city leadership. Fed up with governance dictated by white stakeholders, federal officials, and unelected representatives, local D.C. activists catalyzed a new phase of the fight for home rule. Amid the upheavals of the 1960s, they gave expression to the frustrations of black residents and wrestled for control of their city. Bringing together histories of the carceral and welfare states, as well as the civil rights and Black Power movements, Lauren Pearlman narrates this struggle for self-determination in the nation’s capital. She captures the transition from black protest to black political power under the Lyndon Johnson and Richard Nixon administrations and against the backdrop of local battles over the War on Poverty and the War on Crime.

Through intense clashes over funds and programming, Washington residents pushed for greater participatory democracy and community control. However, the anticrime apparatus built by the Johnson and Nixon administrations curbed efforts to achieve true home rule. As Pearlman reveals, this conflict laid the foundation for the next fifty years of D.C. governance, connecting issues of civil rights, law and order, and urban renewal.

Lauren Pearlman is assistant professor of history at the University of Florida.
For more information about Lauren Pearlman, visit the Author Page.

“Democracy’s Capital makes an important contribution to understanding the interlocking power dynamics that have driven racial, urban, and civil rights history across the United States.”--Journal of African American History

"Democracy's Capital marks a critical contribution to the growing field of carceral studies and gets us closer to understanding the origins of draconian crime-control policies and modern surveillance. Taking into account a range of different perspectives--from grassroots activists and high policy makers to municipal officials and social workers--Pearlman's rich and layered history of Washington, D.C., illuminates the interplay between calls for ‘law and order’ and demands for civil rights and economic justice. In doing so, the book offers readers a profound comment on the contours of American democracy in the late twentieth century."--Elizabeth Hinton, author of From the War on Poverty to the War on Crime: The Making of Mass Incarceration in America

"A must-read for students of modern black politics and mass incarceration. Pearlman illuminates the complicated ways that local and national white power brokers used the wars on poverty and crime to limit the radical possibilities of Black Power activism in the nation’s preeminent chocolate city."--George Derek Musgrove, co-author of Chocolate City: A History of Race and Democracy in the Nation's Capital

"Deeply researched and engagingly written, this book convincingly portrays D.C. as a compelling illustration of federal experimentation, white recalcitrance to the freedom struggle, and the complexity of grassroots responses to such politics."--Gordon K. Mantler, George Washington University