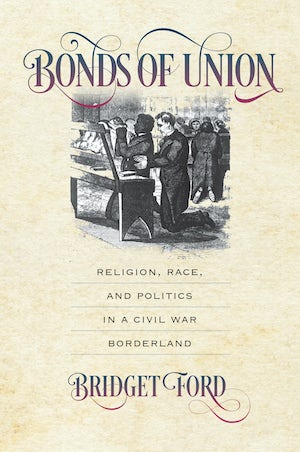 This vivid history of the Civil War era reveals how unexpected bonds of union forged among diverse peoples in the Ohio-Kentucky borderlands furthered emancipation through a period of spiraling chaos between 1830 and 1865. Moving beyond familiar arguments about Lincoln's deft politics or regional commercial ties, Bridget Ford recovers the potent religious, racial, and political attachments holding the country together at one of its most likely breaking points, the Ohio River.

Living in a bitterly contested region, the Americans examined here--Protestant and Catholic, black and white, northerner and southerner--made zealous efforts to understand the daily lives and struggles of those on the opposite side of vexing human and ideological divides. In their common pursuits of religious devotionalism, universal public education regardless of race, and relief from suffering during wartime, Ford discovers a surprisingly capacious and inclusive sense of political union in the Civil War era. While accounting for the era's many disintegrative forces, Ford reveals the imaginative work that went into bridging stark differences in lived experience, and she posits that work as a precondition for slavery's end and the Union's persistence.

“A consistently engaging narrative rife with biographical vignettes on a variety of prominent leaders. Recommended.”--CHOICE

“Shows tremendous research skills and is well-written. . . . Will appeal to those who want to delve deeply into how two major cities in the Civil War borderland dealt with major issues of the mid-19th century.”--Civil War News

“A strikingly unique take on the thirty-plus years of tumult that preceded and then encompassed the American Civil War. . . . Ford’s study will appeal to a wide range of historians.”--Journal of Southern Religion

“A sophisticated, compelling, and imaginative work of scholarship.”--Journal of Interdisciplinary Study

“Ford’s thought-provoking and complex Bonds of Union is a worthy addition to the flourishing scholarship on the role of borders and border identity in the Civil War era. . . . Worthy of recommendation to anyone interested in the field of cultural history and broadens the significance of her work.”--West Virginia History

“Help[s] to complicate our understandings of the past, reminding us how regional allegiances, ideologies, and social relations were often messy affairs at the margins of their societies.”--Register of the Kentucky Historical Society