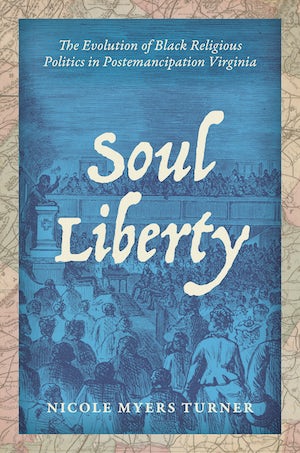 That churches are one of the most important cornerstones of black political organization is a commonplace. In this history of African American Protestantism and American politics at the end of the Civil War, Nicole Myers Turner challenges the idea of black churches as having always been politically engaged. Using local archives, church and convention minutes, and innovative Geographic Information Systems (GIS) mapping, Turner reveals how freedpeople in Virginia adapted strategies for pursuing the freedom of their souls to worship as they saw fit—and to participate in society completely in the evolving landscape of emancipation.

Freedpeople, for both evangelical and electoral reasons, were well aware of the significance of the physical territory they occupied, and they sought to organize the geographies that they could in favor of their religious and political agendas at the outset of Reconstruction. As emancipation included opportunities to purchase properties, establish black families, and reconfigure gender roles, the ministry became predominantly male, a development that affected not only discourses around family life but also the political project of crafting, defining, and teaching freedom. After freedmen obtained the right to vote, an array of black-controlled institutions increasingly became centers for political organizing on the basis of networks that mirrored those established earlier by church associations.

We are proud to announce that this book will also be published as an enhanced open-access e-book on a companion website hosted by Fulcrum, an innovative publishing platform launched by Michigan Publishing at the University of Michigan Library. The Fulcrum version of the book can be located using this link: https://doi.org/10.5149/9781469655253_Turner.

"This is specific, clear, empirical research conducted skillfully and presented straightforwardly. . . . This book swiftly rises to the A-list of must-reads in African American religious history."--Reading Religion

"Impressive. . . . Soul Liberty is a well-researched study and a valuable resource for individuals interested in African American religion and politics."--Journal of Appalachian Studies

“[An] exciting integration of digital humanities with a traditional monograph. . . . [Turner’s] book effectively proves why scholars of Black political life should not ignore the complex history of Black churches.” --Journal of Southern History

“How did black Christians in the South organize themselves both religiously and politically in the wake of the Civil War? Nicole Turner’s answer to that question unfolds in a nuanced and forceful demonstration that challenges common views of black political activity in churches. Turner’s methodology combines traditional archival materials with more recent tools such as GIS mapping, reminding historians that new understandings of the past come from new ways of approaching the sources and the data.”—Mary Beth Mathews, University of Mary Washington