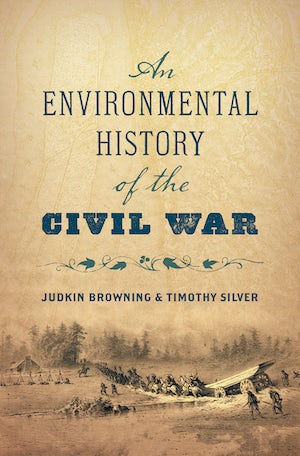 This sweeping new history recognizes that the Civil War was not just a military conflict but also a moment of profound transformation in Americans' relationship to the natural world. To be sure, environmental factors such as topography and weather powerfully shaped the outcomes of battles and campaigns, and the war could not have been fought without the horses, cattle, and other animals that were essential to both armies. But here Judkin Browning and Timothy Silver weave a far richer story, combining military and environmental history to forge a comprehensive new narrative of the war's significance and impact. As they reveal, the conflict created a new disease environment by fostering the spread of microbes among vulnerable soldiers, civilians, and animals; led to large-scale modifications of the landscape across several states; sparked new thinking about the human relationship to the natural world; and demanded a reckoning with disability and death on an ecological scale. And as the guns fell silent, the change continued; Browning and Silver show how the war influenced the future of weather forecasting, veterinary medicine, the birth of the conservation movement, and the establishment of the first national parks.

In considering human efforts to find military and political advantage by reshaping the natural world, Browning and Silver show not only that the environment influenced the Civil War's outcome but also that the war was a watershed event in the history of the environment itself.

Judkin Browning is professor of military history at Appalachian State University and author of Shifting Loyalties: The Union Occupation of Eastern North Carolina.
For more information about Judkin Browning, visit the Author Page.

Timothy Silver is professor of environmental history at Appalachian State University and author of Mount Mitchell and the Black Mountains: An Environmental History of the Highest Peaks in Eastern America.
For more information about Timothy Silver, visit the Author Page.

"For scholars of the Civil War, this book adds a fresh perspective, illustrating how ecology, nature, and weather had a striking and unpredictable effect upon military preparedness and the waging of war."--Library Journal

“As evidenced in the book, Civil War environmental history continues to perform a valuable service through highlighting and deepening our knowledge and appreciation of the many connections between the natural world and the Civil War’s military and home fronts. In this manner, Browning and Silver’s synthesis convincingly treats the war as an ‘ecological event’ as well as a clash between armies and societies.”--Civil War Books and Authors

"With both geographic and chronological sweep, Judkin Browning and Timothy Silver reveal the powerful way nature shaped Civil War campaigns and the experiences of soldiers and civilians. Fast-paced and engaging, this book is a must-read for anyone interested in American environmental history or Civil War history."--Megan Kate Nelson, author of The Three-Cornered War: The Union, the Confederacy, and Native Peoples in the Fight for the West

"For years I have responded to the question 'What is left to say about the Civil War?' with the answer that we need a good study of the environmental impact of the war. Judkin Browning and Timothy Silver have not only met that challenge with great success; they have also written a splendid account of the impact of the environment on the ways in which the war was fought."--James M. McPherson, Pulitzer Prize–winning author of Battle Cry of Freedom

"This creative collaboration between a military historian and an environmental historian has produced a stunning reinterpretation of the Civil War. Highlighting the importance of everything from mud and hogs to brushwood and wildfire, Browning and Silver have produced an imaginative, well-crafted book that will change how we think about the epic conflict."--Ted Steinberg, author of Down to Earth: Nature’s Role in American History