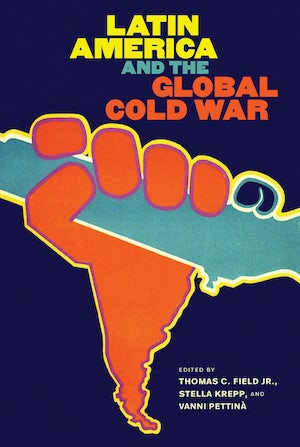 Latin America and the Global Cold War analyzes more than a dozen of Latin America’s forgotten encounters with Africa, Asia, and the Communist world, and by placing the region in meaningful dialogue with the wider Global South, this volume produces the first truly global history of contemporary Latin America. It uncovers a multitude of overlapping and sometimes conflicting iterations of Third Worldist movements in Latin America, and offers insights for better understanding the region’s past, as well as its possible futures, challenging us to consider how the Global Cold War continues to inform Latin America’s ongoing political struggles.

“Attempting to correct historical omissions that either neglect Latin America’s role in the Third World or discuss only how US foreign policy impacted the region, this volume acknowledges how Latin America’s engagement in global affairs fostered and contributed to conversations that challenged US imperialism and pushed for a multilateral approach to development that treated all states equally.”--CHOICE

“Important new volume. . . . An invaluable supplement to international histories of Latin America that remain too narrowly focused on the Western Hemisphere.”--H-Net Reviews

"The 'fruit of a multinational, multilingual effort by fifteen scholars,' this collection of essays reexamines Latin American history from a 'Third Worldist' perspective, defining the Third World as a global political project devoted to anti-imperialist liberation, sovereignty, and development. . . . With memorable anecdotes, concise chapters, and accessible theory, there is much to discover from Latin America and the Global Cold War for professional and general readers alike."--Origins

"As exciting as the burgeoning new scholarship on the Latin American Cold War has been, it has given too little attention to the region's role as a fundamental participant in 'third world' projects elsewhere in the Global South. This big, bold volume, which brings together junior and senior scholars and promotes crosstalk between area specialists and 'new international historians,' provides a timely corrective. In the process it brings Latin America more integrally into critical discussions of the Global Cold War."--Gil Joseph, co-editor of In from the Cold: Latin America's New Encounter with the Cold War

"Creating a new world history means tracing transnational connections that did not necessarily involve the great powers, and understanding the alternative spatial units and regional or global orders that people outside the metropoles sought to create. Here are fourteen stimulating essays that do just that. That they look outward from Latin America, which we often assume was fully locked into the Cold War binary--rather than from parts of Asia and Africa that we already knew were partially outside that binary--makes their challenge to established historiographic frameworks all the more striking. And that most of Cold War Latin America does not fit comfortably under the rubric of 'decolonization,' either--having gained formal sovereignty more than a century earlier--adds still another important conceptual challenge."--Kenneth Pomeranz, co-author of The World That Trade Created: Society, Culture, and the World Economy, 1400 to the Present