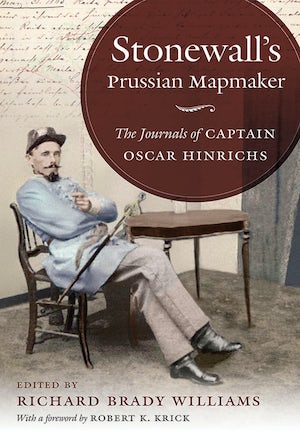 Prussian-born cartographer Oscar Hinrichs was a key member of Stonewall Jackson's staff, collaborated on maps with Jedediah Hotchkiss, and worked alongside such prominent Confederate leaders as Joe Johnston, Richard H. Anderson, and Jubal Early. After being smuggled along the Rebel Secret Line in southern Maryland by John Surratt Sr., his wife Mary, and other Confederate sympathizers, Hinrichs saw action in key campaigns from the Shenandoah Valley and Antietam to Gettysburg, Petersburg, and Appomattox. After the Confederate surrender, Hinrichs was arrested alongside his friend Henry Kyd Douglas and imprisoned under suspicion of having played a role in the Booth conspiracy, though the charges were later dropped.

Richard Brady Williams is an independent historian based in Chapel Hill, North Carolina. He is author of Chicago’s Battery Boys: The Chicago Mercantile Battery in the Civil War’s Western Theater.
For more information about Richard Brady Williams, visit the Author Page.

“A treasure trove of detailed observation and candid insight.”--The Civil War Round Table of the District of Columbia

“Williams has brought [Hinrichs] back to life through his vivid writings.”--Civil War Times

“An indispensable source for studying the Army of Northern Virginia from the Peninsula campaign until the end of the war.”--The Civil War Monitor

“Educated, dedicated, articulate, and headstrong, [Oscar Hinrichs] left behind a record of his wartime experiences well worth reading.”--Army History

"Fascinating descriptions, opinions, and analyses brighten almost every page of [these] journals. . . . [For years] I have been saying [that] when Oscar reaches print, his memoir will be a candidate for denomination as Confederate Memoir of the Decade and among the dozen best ever to reach print. Here is Oscar Hinrichs at last, and in splendid form." --Robert K. Krick, from the Foreword

"As the highly literate and unfailingly candid observations of a well-placed Confederate staff officer, Stonewall's Prussian Mapmaker is of paramount importance in understanding the leadership of the Army of Northern Virginia. Captain Hinrichs’s character sketches of the legion of Southern generals whom he came to know intimately are among the most penetrating I have ever read. Enhanced by Richard Williams' fine editorial work, this book is sure to become a Confederate classic."--Peter Cozzens, author of Shenandoah 1862: Stonewall Jackson's Valley Campaign 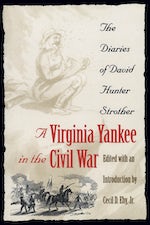