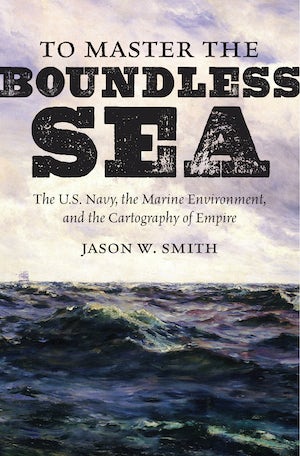 As the United States grew into an empire in the late nineteenth century, notions like “sea power” derived not only from fleets, bases, and decisive battles but also from a scientific effort to understand and master the ocean environment. Beginning in the early nineteenth century and concluding in the first years of the twentieth, Jason W. Smith tells the story of the rise of the U.S. Navy and the emergence of American ocean empire through its struggle to control nature. In vividly told sketches of exploration, naval officers, war, and, most significantly, the ocean environment, Smith draws together insights from environmental, maritime, military, and naval history, and the history of science and cartography, placing the U.S. Navy’s scientific efforts within a broader cultural context.

By recasting and deepening our understanding of the U.S. Navy and the United States at sea, Smith brings to the fore the overlooked work of naval hydrographers, surveyors, and cartographers. In the nautical chart’s soundings, names, symbols, and embedded narratives, Smith recounts the largely untold story of a young nation looking to extend its power over the boundless sea.

“In this well-researched book, Smith examines the extension of American knowledge during the nineteenth century and focuses in particular on the American navy.”--Journal of Military History

“Any compelling book like To Master the Boundless Sea makes a reader wish for more: for more reference and comparison to the British empire, for instance. But Smith has already engaged with so many historiographies, and assembled such a rich argument and narrative, that To Master the Boundless Sea will benefit many historians grappling with American overseas empire, science, and the environment in the 19th century. The book deserves to be widely read.”--Diplomatic History

“Offers a new argument for the U.S. Navy’s role in the pursuit and development of American empire . . . . Stands very usefully at the intersection of numerous fields of history: military history, naval history, the history of science, maritime history, and environmental history.”--Diplomatic History

“Impressive . . . . For scholars interested in early U.S. historical experience in the hydrographic and chart-making fields, this will be a good source of references. Full of useful research material, it should be in your library.”--Naval History Magazine

“A well-written and thought-provoking look at the US Navy during a long period of transition, one which questions—or at least reframes—several standard narratives. . . . Highly recommended.”--International Journal of Maritime History

“An engaging and thoughtful book—ambitious in its scope, creative in its organization, and masterful in its execution.”--Isis Review