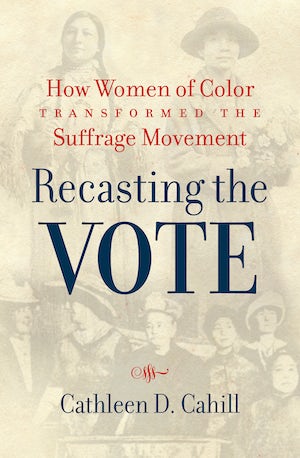 We think we know the story of women’s suffrage in the United States: women met at Seneca Falls, marched in Washington, D.C., and demanded the vote until they won it with the ratification of the Nineteenth Amendment. But the fight for women's voting rights extended far beyond these familiar scenes. From social clubs in New York’s Chinatown to conferences for Native American rights, and in African American newspapers and pamphlets demanding equality for Spanish-speaking New Mexicans, a diverse cadre of extraordinary women struggled to build a movement that would truly include all women, regardless of race or national origin. In Recasting the Vote, Cathleen D. Cahill tells the powerful stories of a multiracial group of activists who propelled the national suffrage movement toward a more inclusive vision of equal rights. Cahill reveals a new cast of heroines largely ignored in earlier suffrage histories: Marie Louise Bottineau Baldwin, Gertrude Simmons Bonnin (Zitkala-Ša), Laura Cornelius Kellogg, Carrie Williams Clifford, Mabel Ping-Hua Lee, and Adelina “Nina” Luna Otero-Warren. With these feminists of color in the foreground, Cahill recasts the suffrage movement as an unfinished struggle that extended beyond the ratification of the Nineteenth Amendment.

As we celebrate the centennial of a great triumph for the women’s movement, Cahill’s powerful history reminds us of the work that remains.

"Written to coincide with the centennial of the 19th Amendment, this important book reminds us that the familiar stories of women's suffrage are woefully incomplete. . . . An essential work; highly recommended for scholars of the period and general readers interested in women's history."--Library Journal

"This spirited history situates the campaign for female suffrage within the broader narrative of civil rights. . . . Cahill’s widened focus links the battle for enfranchisement to currents of exclusion and empowerment that continue to shape the vote today."--The New Yorker

“Cathleen D. Cahill’s narrative-supplanting book . . . challenges the reductive, whitewashed accounts of how the 19th amendment was ratcheted through the political process. . . . Cahill’s text doesn’t merely add minority figures to the story of women’s enfranchisement, it proves it is impossible to tell the story without them.”--Tribal College Journal

"A much-needed perspective on the efforts to gain full suffrage for American women at the start of the 20th century. . . . An impressive corrective for those so long left out of this history."--CHOICE

"This is a vital and timely corrective. Recasting the Vote is not merely an additive project. These women’s stories fundamentally rewrite the traditional suffrage narrative, move us beyond the black/white binary, and show how race and sex have always intertwined in the long and ongoing struggle for the vote."--Kimberly Hamlin, author of Free Thinker: Sex, Suffrage, and the Extraordinary Life of Helen Hamilton Gardener

"Recasting the Vote tells the story of women’s suffrage with the women of today in mind. Through probing research and vivid storytelling, Cathleen Cahill unearths how women of color charted their own routes to voting rights, transforming a movement. Their lives speak to our own time through timely lessons about how racism and sexism can undercut women’s political power. This is the book we have long been waiting for and that we need."--Martha S. Jones, author of Vanguard: How Black Women Broke Barriers, Won the Vote, and Insisted Upon Equality for All