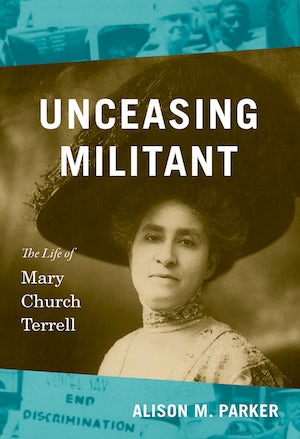 Born into slavery during the Civil War, Mary Church Terrell (1863–1954) would become one of the most prominent activists of her time, with a career bridging the late nineteenth century to the civil rights movement of the 1950s. The first president of the National Association of Colored Women and a founding member of the NAACP, Terrell collaborated closely with the likes of Frederick Douglass, Ida B. Wells, and W. E. B. Du Bois. Unceasing Militant is the first full-length biography of Terrell, bringing her vibrant voice and personality to life. Though most accounts of Terrell focus almost exclusively on her public activism, Alison M. Parker also looks at the often turbulent, unexplored moments in her life to provide a more complete account of a woman dedicated to changing the culture and institutions that perpetuated inequality throughout the United States.

Drawing on newly discovered letters and diaries, Parker weaves together the joys and struggles of Terrell's personal, private life with the challenges and achievements of her public, political career, producing a stunning portrait of an often-under recognized political leader.

Alison M. Parker is department chair and Richards Professor of American History at the University of Delaware.
For more information about Alison M. Parker, visit the Author Page.

"Unceasing Militant is an admiring yet fair tribute to activist Mary Church Terrell, whose sustained, determined belief is inspiring."--Foreword Reviews

"Terrell is an understudied figure in American history, and this biography is well suited for scholars of history and women's studies as well as aspiring agents of change."--Library Journal

"Fills a vital gap in our knowledge of nineteenth and twentieth century Black activism. . . . A must-read for anyone interested in the history of the fight for racial and gender equality in the U.S. as well as anyone interested in social movements of the Jim Crow era."--Black Perspectives

"Kudos to Alison Parker for her vivid portrait of the unparalleled Mary Church Terrell. In a life lived between 1863 and the end of slavery and 1954 and the birth of modern civil rights, Terrell used 'dignified agitation' to wage a freedom struggle against lynching and racism and in support of women’s votes, equal education, antiwar efforts, and civil rights. Parker does a deep dive into the archives to fashion a compelling life-and-times portrait that places Terrell and black women’s politics where they should be: at the heart of nearly every important social movement of the twentieth century. In this ambitious and timely biography, Parker finally gives Terrell the sustained scholarly attention she deserves."--Martha S. Jones, author of Vanguard: How Black Women Broke Barriers, Won the Vote, and Insisted on Equality for All

"I so appreciate Alison Parker's ability to tell the story of Mary Church Terrell's brave and courageous life with a sense of critical compassion."--Ula Taylor, author of The Promise of Patriarchy: Women and the Nation of Islam

"Mary Church Terrell is one of the most important hidden figures of the twentieth century, and Alison Parker's keen yet warm historical eye allows Terrell's life story to blossom. A proudly African American woman born into slavery and raised in freedom, Terrell bore witness to the rise and fall of Jim Crow over a life that spanned almost a century. There is something in Terrell's story for every reader interested in twentieth-century social movements--civil rights, women's rights, prison reform, women's health advocacy, Pan-Africanism, human rights between the two World Wars, and U.S. presidential politics."--Nikki Brown, author of Private Politics and Public Voices:  Black Women’s Activism from World War I to the New Deal