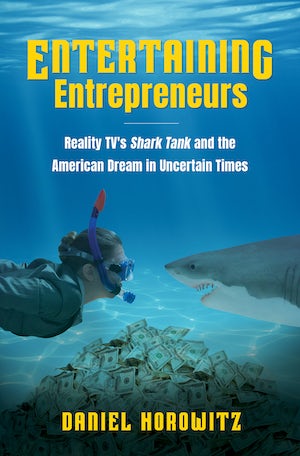 The Great Recession threatened the well-being of tens of millions of Americans, dramatically weakened the working class, hollowed out the middle class, and strengthened the position of the very wealthy. Against this backdrop, the hit reality show Shark Tank premiered in 2009. Featuring ambitious entrepreneurs chasing support from celebrity investors, the show offered a version of the American Dream that still seemed possible to many, where a bright idea and a well-honed pitch could lift a bootstrap business to new heights of success. More than a decade later, Shark Tank still airs regularly on multiple networks, and its formula has sparked imitators everywhere, from elite universities to elementary school classrooms.

In Entertaining Entrepreneurs, Daniel Horowitz shows how Shark Tank’s version of entrepreneurship disguises and distorts the opportunities and traps of capitalism. Digging into today’s cult of the entrepreneur, Horowitz charts its rise from the rubble of economic crisis and its spread as a mainstay of American culture, and he explores its flawed view of what it really takes to succeed in business.

Horowitz offers more than a look at one television phenomenon. He is the perfect guide to the portrayal of entrepreneurship in business school courses, pitch competitions, popular how-to books, and scholarly works, as well as the views of real-world venture capitalists.

“Entertaining Entrepreneurs offers an original approach to and insightful examination of two hugely important cultural, political, and economic phenomena: the rise of reality television and the emergence of the ‘entrepreneur’ as the engine of American progress. Even if they’ve never watched Shark Tank, readers of this excellent book will learn a lot about how that show offers a window into modern American capitalism and culture.”--Lawrence Glickman, author of Free Enterprise: An American History

"A deep, astute dive into how the American Dream became an entrepreneurial dream in a post-Great Recession world, and how one reality TV hit reveals the hustle, the mythos, and, ultimately, the precarity of the modern entrepreneurial ideal."--Margaret O’Mara, author of The Code: Silicon Valley and the Remaking of America

"Daniel Horowitz has given us an engaging and learned look into the culture of entrepreneurship in America. He masterfully uses Shark Tank to weave the fascinating story of how changes in media, business, and education have transformed our ideas of the American Dream. This is a must-read for anyone interested in how entrepreneurship is changing American culture, or in how pop culture is transforming entrepreneurship."--Dan Wadhwani, University of Southern California