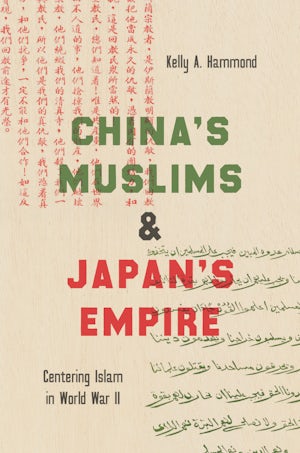 In this transnational history of World War II, Kelly A. Hammond places Sino-Muslims at the center of imperial Japan’s challenges to Chinese nation-building efforts. Revealing the little-known story of Japan’s interest in Islam during its occupation of North China, Hammond shows how imperial Japanese aimed to defeat the Chinese Nationalists in winning the hearts and minds of Sino-Muslims, a vital minority population. Offering programs that presented themselves as protectors of Islam, the Japanese aimed to provide Muslims with a viable alternative—and, at the same time, to create new Muslim consumer markets that would, the Japanese hoped, act to subvert the existing global capitalist world order and destabilize the Soviets.

This history can be told only by reinstating agency to Muslims in China who became active participants in the brokering and political jockeying between the Chinese Nationalists and the Japanese Empire. Hammond argues that the competition for their loyalty was central to the creation of the ethnoreligious identity of Muslims living on the Chinese mainland. Their wartime experience ultimately helped shape the formation of Sino-Muslims’ religious identities within global Islamic networks, as well as their incorporation into the Chinese state, where the conditions of that incorporation remain unstable and contested to this day.

Kelly A. Hammond is assistant professor of history at the University of Arkansas.
For more information about Kelly A. Hammond, visit the Author Page.

“China’s Muslims and Japan’s Empire has a little bit for everyone. It has contemporary implications for the ways that we think about the place of Muslim minorities who live in the People’s Republic of China. At the same time, there are some good escapist stories that follow individual Muslims as they navigate their relationships with the Japanese Empire during World War II.”--Los Angeles Review of Books China Channel

"An illuminating overview of Japan’s overtures during WWII to minority Muslim communities in Asia as a nation-building tactic. . . . An excellent and important addition to the WWII history shelf."--Publishers Weekly

"A fascinating read and provides insight into a region and history which are all too often neglected. The book forces us to re-think how the history of the Second World War is taught. Our understanding of the conflict is usually from the perspective of Europe and the war with Germany, but millions fought and died across Asia and many of the wounds from that time are part of the political memory in places like China. This book is a much needed study. The fact that it is also an enjoyable read is a bonus."--Middle East Monitor

“Rescuing the history of Chinese Muslims from the oppressive story of Chinese nationalism, Kelly A. Hammond presents a bold critical view of the dominant narratives of modern China and East Asia. Centering Chinese Muslim experience in the process of Japanese imperialism, Chinese nation-building, and China’s relations with Muslim countries, Hammond demonstrates why this history matters for contemporary struggles around minority rights and human dignity.”—Cemil Aydin, author of The Idea of the Muslim World: A Global Intellectual History

“This is a groundbreaking examination of Japan’s efforts to forge Muslim alliances across 1930s and 1940s Asia. Hammond’s innovative study of China’s Muslims under Japanese control reveals a little-known dimension of Axis and Allied efforts to attract support from the Muslim-majority portions of the globe. The result is a historical tale replete with extravagant enticements, shadowy intrigue, and diplomatic conspiracies. This book contributes to an array of fields, including twentieth-century China, Asian studies, World War II studies, international relations, and Islamic studies.”—David G. Atwill, author of Islamic Shangri-la