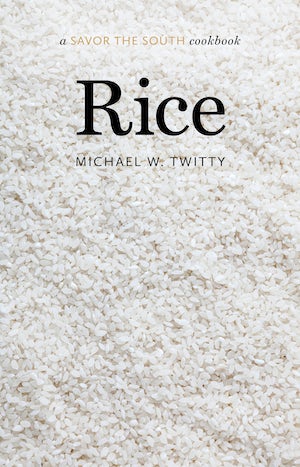 Among the staple foods most welcomed on southern tables—and on tables around the world—rice is without question the most versatile. As Michael W. Twitty observes, depending on regional tastes, rice may be enjoyed at breakfast, lunch, and dinner; as main dish, side dish, and snack; in dishes savory and sweet. Filling and delicious, rice comes in numerous botanical varieties and offers a vast range of scents, tastes, and textures depending on how it is cooked. In some dishes, it is crunchingly crispy; in others, soothingly smooth; in still others, somewhere right in between. Commingled or paired with other foods, rice is indispensable to the foodways of the South.

As Twitty’s fifty-one recipes deliciously demonstrate, rice stars in Creole, Acadian, soul food, Low Country, and Gulf Coast kitchens, as well as in the kitchens of cooks from around the world who are now at home in the South. Exploring rice’s culinary history and African diasporic identity, Twitty shows how to make the southern classics as well as international dishes—everything from Savannah Rice Waffles to Ghanaian Crab Stew. As Twitty gratefully sums up, “Rice connects me to every other person, southern and global, who is nourished by rice’s traditions and customs.”

Michael Twitty is a culinary historian and author of the James Beard Award-winning The Cooking Gene: A Journey through African American Culinary History in the Old South.
For more information about Michael W. Twitty, visit the Author Page.

“A jampacked volume . . . [Twitty] has a gift for presenting the historical in a manner that is both accessible and personal.”—New York Times

“Rice, which contains fifty-one recipes featuring and supporting the grain—including jollof rice, curried rice salad, and Carolina pilau—focuses Twitty’s critical acumen on an ingredient so versatile it has the power to become the main course, a side dish, or dessert. Written in praise of the globally important and endlessly adaptable food, Twitty traces rice’s journey from Africa through the Caribbean and into the American South.”—Garden & Gun

“Joyously illustrates why rice is a staple of diets worldwide and is central to the chefs and practices of the American South and the African diaspora.”—Philadelphia Inquirer

“Before embarking on the recipes, Twitty offers a history of how rice became a staple in the American South, especially after the arrival of enslaved people. . . . Another excellent addition to the Savor the South cookbook series that will appeal to fans of Southern cooking, and anyone looking for new takes on a common ingredient.”—Library Journal

“Links the proliferation of rice across the South to its African origins. Recognizing the ubiquity of rice in Asia, Latin America, and other parts of the world, Twitty doesn’t claim Africans invented rice; instead, he presents a forgotten and often ignored history of African influence in how rice is cultivated, prepared, and served throughout the South and the world.”—Bittman Project