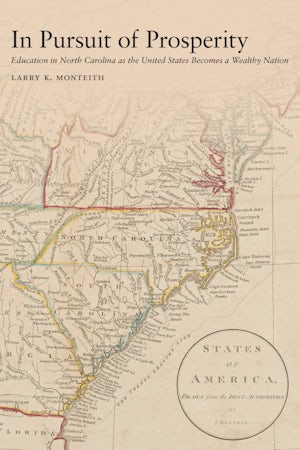 During his tenure as Chancellor of North Carolina State University, Larry K. Monteith witnessed the state’s transformation from a largely agrarian-based economy into one driven by major pharmaceutical, medical, and technological advances. In this sweeping survey from colonial times to the modern era, Monteith argues that it was North Carolina’s investment in practical education that drove this change more than anything else, bringing prosperity and progress that was unique to the South.

Monteith begins his study with our roots in the traditions of England and Europe, tracing developments through the World Wars. Much of the foundation for North Carolina’s progress was built during these years, but the major transformation took place in the post-World War II era when the investment in higher education paid off. It is easy to lose sight of how radical the concept of something like Research Triangle Park was during its inception. North Carolina may have seemed like an unlikely place to invest, but its universities and the research happening there attracted companies like IBM, Bayer, and Eli Lilly that would become critical economic anchors. It was during this time that innovations and discoveries in the burgeoning fields of medicine, science, and engineering led to valuable patents, copyrights, and companies that would become the backbone of the state’s economy.

Comparing North Carolina with the rest of the nation, In Pursuit of Prosperity explores what was unique about its system of education, institutions, and economy. Monteith himself was directly involved, especially in the early formation of Research Triangle Park, and he offers readers a unique perspective on this part of the state’s history.

Larry K. Monteith, a native of Bryson City, NC, was an undergraduate of North Carolina State University and received his MS and PhD in electrical engineering from Duke University. He worked at the Solid State Laboratory of the Research Triangle Institute before joining the faculty of the NC State University Department of Electrical Engineering in 1968. Monteith became NC State’s eleventh chancellor, serving from 1990-1998, and he was instrumental in developing its Centennial Campus. He lives with his wife, Nancy, in Morrisville, NC.
For more information about Larry K. Monteith, visit the Author Page.