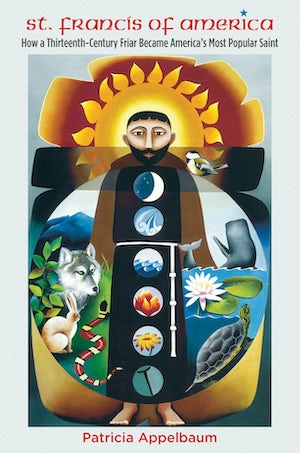 How did a thirteenth-century Italian friar become one of the best-loved saints in America? Around the nation today, St. Francis of Assisi is embraced as the patron saint of animals, beneficently presiding over hundreds of Blessing of the Animals services on October 4, St. Francis's Catholic feast day. Not only Catholics, however, but Protestants and other Christians, Hindus, Buddhists, Jews, and nonreligious Americans commonly name him as one of their favorite spiritual figures. Drawing on a dazzling array of art, music, drama, film, hymns, and prayers, Patricia Appelbaum explains what happened to make St. Francis so familiar and meaningful to so many Americans.

Appelbaum traces popular depictions and interpretations of St. Francis from the time when non-Catholic Americans "discovered" him in the nineteenth century to the present. From poet to activist, 1960s hippie to twenty-first-century messenger to Islam, St. Francis has been envisioned in ways that might have surprised the saint himself. Exploring how each vision of St. Francis has been shaped by its own era, Appelbaum reveals how St. Francis has played a sometimes countercultural but always aspirational role in American culture. St. Francis's American story also displays the zest with which Americans borrow, lend, and share elements of their religious lives in everyday practice.

Patricia Appelbaum, an independent scholar of religion and American culture, is author of Kingdom to Commune: Protestant Pacifist Culture between World War I and the Vietnam Era.
For more information about Patricia Appelbaum, visit the Author Page.

"This well-researched biography is recommended as a case study of how the perceptions of historical individuals change over the course of time to fit and speak to contemporary issues."--Library Journal

“Achieves success as both a work of careful scholarship and a delightful read.”--Choice

“Representative of the best of modern historical scholarship. . . . The volume will undoubtedly be of interest to scholars, educated laity, atheist, agnostic, and religionist alike.”--American Historical Review

"Makes an important contribution to American history of religion and to the field of Franciscan studies. . . . A must-read for historians of American religion and the Franciscan tradition alike."--American Catholic Studies

"An entertaining read [that] helps us separate the real figure from folklore--Francis the popular icon from Francis the man."--Episcopal Journal

“A cultural history of how the medieval monk has been represented in U.S. culture over the past two hundred years.”--Journal of American History

Check out the author's blog, St. Francis Sightings, for ongoing updates and commentary.

Watch: Appelbaum talks to Peggy Bendroth as part of the History Matters series at the Congregational Library and Archives. (4/24/2014, running time 5:11.)

Read: Appelbaum's article "Why blessing animals has become popular in recent decades" at The Christian Century's Then and Now blog. (10/28/2015)