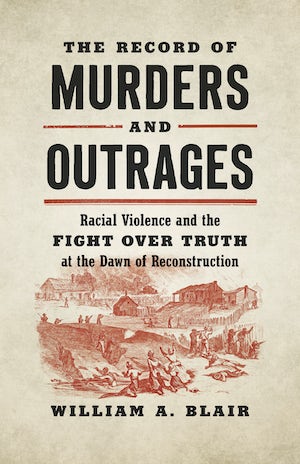 To purchase online via an independent bookstore, visit Bookshop.org
After the Civil War's end, reports surged of violence by Southern whites against Union troops and Black men, women, and children. While some in Washington, D.C., sought to downplay the growing evidence of atrocities, in September 1866, Freedmen’s Bureau commissioner O. O. Howard requested that assistant commissioners in the readmitted states compile reports of "murders and outrages" to catalog the extent of violence, to prove that the reports of a peaceful South were wrong, and to argue in Congress for the necessity of martial law. What ensued was one of the most fascinating and least understood fights of the Reconstruction era—a political and analytical fight over information and its validity, with implications that dealt in life and death.

Here William A. Blair takes the full measure of the bureau’s attempt to document and deploy hard information about the reality of the violence that Black communities endured in the wake of Emancipation. Blair uses the accounts of far-flung Freedmen's Bureau agents to ask questions about the early days of Reconstruction, which are surprisingly resonant with the present day: How do you prove something happened in a highly partisan atmosphere where the credibility of information is constantly challenged? And what form should that information take to be considered as fact?

William A. Blair is the Walter L. and Helen P. Ferree Professor Emeritus of Middle American History at Penn State University.
For more information about William A. Blair, visit the Author Page.

"Blair has delivered a magnificent contribution to the history of the period that adds to ongoing efforts to peel back the layers of atrocity and denial that enabled white conservatives to overthrow and abandon Reconstruction and distort its history. With American democracy under attack today, many historians have demonstrated a tendency to look abroad for examples of totalitarianism and reactionary violence. The Record of Murders and Outrages makes clear that anyone serious about understanding threats to American freedom and democracy need look no further than our own shores.”—The Journal of Southern History

“Absorbing. . . [A]n in-depth look at a divisive and deadly period in our history when political calculus too often trumped humanity.”—America's Civil War

“William A. Blair has uncovered a treasure trove of documentation from the records of the Freedmen’s Bureau...Fake news and alternative realities thrive in an atmosphere where facts are discounted and truth-debased. The proof of what really happened during the turbulent years of Reconstruction lies, in part, in The Record of Murders and Outrages.”—Civil War Times

“This book will be of interest to both the scholar and the general reader in its coverage of the process by which the Freedmen’s Bureau gathered evidence of violence. Its chapter on Texas provides a good overview of recent scholarship about that topic.”—Southwestern Historical Quarterly

“In this recommended volume, readers will discover the origins of societal attitudes still found in 2021 among some groups of American citizens and their representatives at state and national levels, who remain attached to a vision of an ever-white America and dedicated to effecting legislation designed to perpetuate white supremacy. It is also a record of the pioneering efforts of Americans in the post-Civil War years to try to ensure an inclusive society.”—The Journal of America’s Military Past 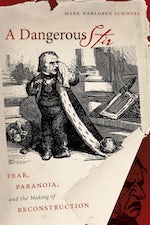