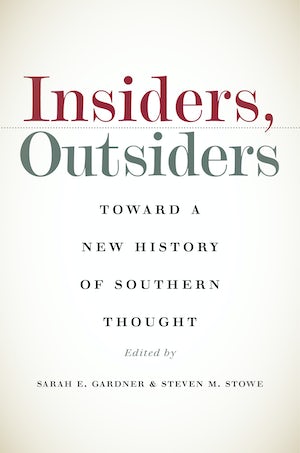 The history of thought and thinking in the American South is now alive with curiosity and poised for a new maturity. Thanks to the efforts of a growing variety of critics, the region is increasingly understood as a cultural habitat comprised of flows of ideas and sensibilities that originate both inside and outside traditional boundaries. This volume of essays uniquely combines perspectives from historians and literary scholars to explore a wide spectrum of thought about a region long understood as distinctive, yet often taken to represent “American” culture and character. Contributors first engage with how southern thinkers of all sorts have struggled with belonging--who is an insider and who is an outsider. Second, they consider how thought in the South has over time created ideas about the South. The volume capitalizes on an interdisciplinary synergy that has come to characterize southern studies, exploring current creative tensions between classic themes in southern history and the new ways to approach them. Region and identity, intellectuals and change, the South as an idea and ideas in the South—these continue to inspire the best new research as showcased in this collection.

"An innovative, field-defining collection that highlights the increasing methodological sophistication and growth of southern intellectual history." – Coleman Hutchison, University of Texas at Austin

“The provocative essays in Insiders, Outsiders call upon an eclectic range of topics to complicate the relationship of history to literature, suggesting their fundamental interconnection as disciplines.” —Kathryn McKee, University of Mississippi