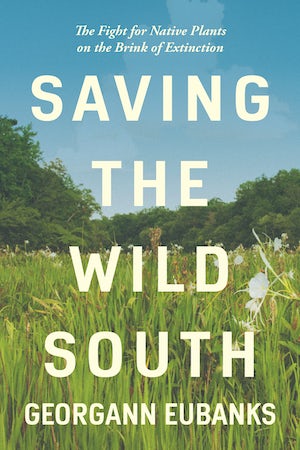 The American South is famous for its astonishingly rich biodiversity. In this book, Georgann Eubanks takes a wondrous trek from Alabama to North Carolina to search out native plants that are endangered and wavering on the edge of erasure. Even as she reveals the intricate beauty and biology of the South’s plant life, she also shows how local development and global climate change are threatening many species, some of which have been graduated to the federal list of endangered species.

Why should we care, Eubanks asks, about North Carolina’s Yadkin River goldenrod, found only in one place on earth? Or the Alabama canebrake pitcher plant, a carnivorous marvel being decimated by criminal poaching and a booming black market? These plants, she argues, are important not only to the natural environment but also to southern identity, and she finds her inspiration in talking with the heroes—the botanists, advocates, and conservationists young and old—on a quest to save these green gifts of the South for future generations. These passionate plant lovers caution all of us not to take for granted the sensitive ecosystems that contribute to the region’s long-standing appeal, beauty, and character.

Georgann Eubanks is a writer and Emmy-winning documentarian. Her most recent book is The Month of Their Ripening: North Carolina Heritage Foods through the Year.
For more information about Georgann Eubanks, visit the Author Page.

"There’s great urgency when it comes to saving threatened plants, and Saving the Wild South is an inspiring, journalistic overview of endangered and important species, with broad appeal for gardeners and conservationists."—Foreword Reviews

"Eubanks's determined journey to see these plants and talk to those who are trying to preserve biodiversity in the wild South make this book revelatory, joyous and sobering."—Southern Review of Books

"A highly readable account that roams from wetlands to mountaintops. . . .The images show not only elusive plants and flowers, but the various people Eubanks encounters in her searches, giving the book the feel of an illustrated travel journal such as a 19th-century naturalist might have produced."—Chapter 16

“This beautiful book calls clearly to each of us, asking us to understand the native botanical treasures in the distinct geography of the American South. So many wrenching, poignant, important stories that I had not known fill this calm, sensible book, whose pages are bound together with vines, in whose pages wildflowers are pressed. Think of this book as an expedition to plants and stories you can scarcely believe exist. You will be changed by it.”—Janisse Ray, author of Wild Spectacle: Seeking Wonders in a World Beyond Humans

“A big hurdle to instilling a greater appreciation of the environmental crises facing the world—climate change first among them—is getting our hands on engaging stories about how we know what we know about science. Georgann Eubanks, with the help of magnificent photographs by Donna Campbell, has solved that problem for twelve fascinating native plants under threat in the South. This book is just what we need to get folks more engaged.”--Holden Thorp, editor-in-chief of Science

“Georgann Eubanks has chronicled the myriad ways that the culture and the land of the southeastern United States have sustained its people, and now she delivers an urgent and eloquent evocation requiring us to return the favor. This book is not just a celebration of a precious place but a call to action to save it. Read it. Now.”—Ronni Lundy, author of Victuals: An Appalachian Journey, with Recipes