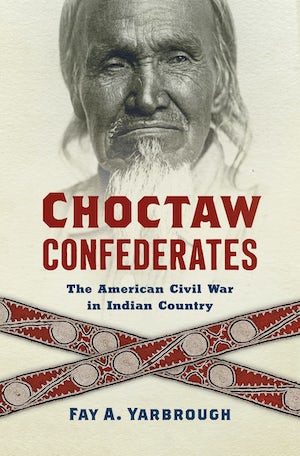 When the Choctaw Nation was forcibly resettled in Indian Territory in present-day Oklahoma in the 1830s, it was joined by enslaved Black people—the tribe had owned enslaved Blacks since the 1720s. By the eve of the Civil War, 14 percent of the Choctaw Nation consisted of enslaved Blacks. Avid supporters of the Confederate States of America, the Nation passed a measure requiring all whites living in its territory to swear allegiance to the Confederacy and deemed any criticism of it or its army treasonous and punishable by death. Choctaws also raised an infantry force and a cavalry to fight alongside Confederate forces.

In Choctaw Confederates, Fay A. Yarbrough reveals that, while sovereignty and states’ rights mattered to Choctaw leaders, the survival of slavery also determined the Nation’s support of the Confederacy. Mining service records for approximately 3,000 members of the First Choctaw and Chickasaw Mounted Rifles, Yarbrough examines the experiences of Choctaw soldiers and notes that although their enthusiasm waned as the war persisted, military service allowed them to embrace traditional masculine roles that were disappearing in a changing political and economic landscape. By drawing parallels between the Choctaw Nation and the Confederate states, Yarbrough looks beyond the traditional binary of the Union and Confederacy and reconsiders the historical relationship between Native populations and slavery.

Fay A. Yarbrough is professor of history at Rice University and the author of Race and the Cherokee Nation.


For more information about Fay A. Yarbrough, visit the Author Page.

"An award-worthy feat of research and writing. Its wide-ranging treatment of the Choctaw offers much needed expansion to a literature of Civil War-era Indian Territory that remains disproportionately focused on the Cherokee."—Civil War Books & Authors

"Scholars of the Civil War Era, the Civil War in the West, and those interested in race and slavery in Indigenous nations will undoubtedly find this deeply researched book immensely valuable and illuminating."—Civil War Book Review

"Historians of the Civil War and Reconstruction should read Choctaw Confederates and appreciate Yarbrough’s important contribution."—H-CivWar

"A scrupulous Civil War history that reads at times like a political thriller, Choctaw Confederates shows why and how Native American statesmen, police officers, soldiers, and family members identified with the South’s martial cause in order to protect Indigenous sovereignty and defend a system of racial slavery. In the hands of Fay Yarbrough, a most talented historian of Black-Native relations and Indian Territory, this sensitive subject is handled with care and interpreted through a revealing range of Native American as well as African American sources. This book offers a penetrating look at a Native American state that chose to support the Confederate states and at the population of enslaved Blacks over whose bodies these ideological battles were fought."—Tiya Miles, author of All That She Carried: The Journey of Ashley’s Sack, a Black Family Keepsake

“With compelling storytelling and insightful analysis, Choctaw Confederates reminds readers about the importance of Indigenous sovereignty and reshapes our understanding of the Civil War’s western theater.”—Gregory D. Smithers, author of The Cherokee Diaspora: An Indigenous History of Migration, Resettlement, and Identity