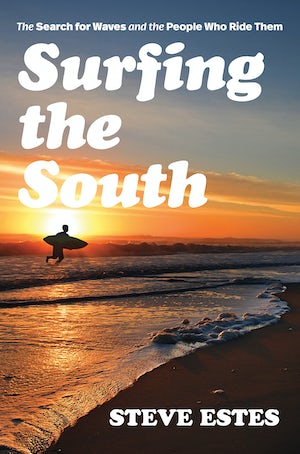 Paperback Available May 2022, but pre-order your copy today!

When most Americans think of surfing, they often envision waves off the coasts of California, Hawai’i, or even New Jersey. What few know is that the South has its own surf culture. To fully explore this unsung surfing world, Steve Estes undertook a journey that stretched more than 2,300 miles, traveling from the coast of Texas to Ocean City, Maryland. Along the way he interviewed and surfed alongside dozens of people—wealthy and poor, men and women, Black and white—all of whom opened up about their lives, how they saw themselves, and what the sport means to them. They also talked about race, class, the environment, and how surfing has shaped their identities.

The cast includes a retired Mississippi riverboat captain and alligator hunter who was one of the first to surf the Gulf Coast of Louisiana, a Pensacola sheet-metal worker who ran the China Beach Surf Club while he was stationed in Vietnam, and a Daytona Beach swimsuit model who shot the curl in the 1966 World Surfing Championships before circumnavigating the globe in search of waves and adventure. From these varied and surprising stories emerge a complex, sometimes troubling, but nevertheless beautiful picture of the modern South and its people.

Steve Estes is an avid surfer and professor of history at Sonoma State University.
For more information about Steve Estes, visit the Author Page.

“This is an entertaining and engaging book, a print documentary of the people and places that make up this coastal chain of breaks. Estes roams in and out of homes, restaurants, surf shops, and of course beaches, catching a wave when he can. He is an observant narrator, and the book is full of diverse and revealing interviews with the folks who have sustained the southern surfing scene. As Estes fleshes out the histories of the coastal communities where surf culture endures, a collective portrait emerges that is not just about surfing but about how people work their passions into their lives and build their lives around their passions.”—Douglas Reichert Powell, author of Endless Caverns

“Part road story,part history, and part account of a middle-aged father hesitantly coming to terms with his aging daughter, Surfing the South is an insightful, hilarious, and ultimately touching book. A wonderfully written blend of southern history, surfing history, and beautiful insights into the magic of surfing in a place such as the South.”—Scott Laderman, author of Empire in Waves: A Political History of Surfing