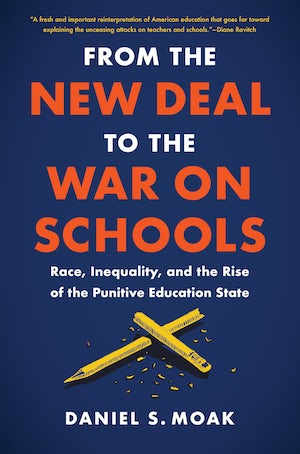 In an era defined by political polarization, both major U.S. parties have come to share a remarkably similar understanding of the education system as well as a set of punitive strategies for fixing it. Combining an intellectual history of social policy with a sweeping history of the educational system, Daniel S. Moak looks beyond the rise of neoliberalism to find the origin of today’s education woes in Great Society reforms.

In the wake of World War II, a coalition of thinkers gained dominance in U.S. policymaking. They identified educational opportunity as the ideal means of addressing racial and economic inequality by incorporating individuals into a free market economy. The passage of the Elementary and Secondary Education Act (ESEA) in 1965 secured an expansive federal commitment to this goal. However, when social problems failed to improve, the underlying logic led policymakers to hold schools responsible. Moak documents how a vision of education as a panacea for society's flaws led us to turn away from redistributive economic policies and down the path to market-based reforms, No Child Left Behind, mass school closures, teacher layoffs, and other policies that plague the public education system to this day.

"Daniel Moak has written a fresh and important reinterpretation of American education that goes far toward explaining the unceasing attacks on teachers and schools. Moak describes the ideological battles among educators and demonstrates how education leaders capitulated to a view that shifted the blame for poverty and inequality to the schools. His attention to the role of African American thinkers is especially valuable."—Diane Ravitch, author of The Death and Life of the Great American School System: How Testing and Choice are Undermining Education

“An important book. Complementing a growing body of scholarship that traces the seeds of neoliberal economic and social policy to the growth-oriented policies and reforms that characterized President Johnson’s Great Society, this book convincingly shows how the compromises liberals made in the 1960s helped lay the foundation for the mess before us now.”—Touré F. Reed, Illinois State University

“From the New Deal to the War on Schools will be a welcome addition to the fields of policy history, African American studies, and American intellectual history. Daniel Moak’s analysis of how the United States came to rely on schooling as its primary tool in addressing racial inequalities is a vital contribution to the story of American education.”—Judith Kafka, Marxe School of Public and International Affairs at Baruch College​

“How did the promise of universal education as an engine of American citizenship and inclusion mutate into a pillar of neoliberalism, focused more on reinforcing than transforming a fundamentally unequal political economy? In this captivating and bracing book, Daniel Moak compellingly unpacks the rise of the ‘education state’ and shows what history can teach us about the predicament of American schools today.”—Robert C. Lieberman, Johns Hopkins University