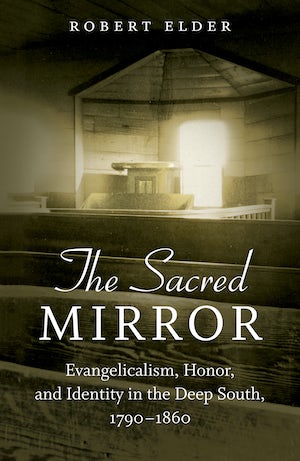 Most histories of the American South describe the conflict between evangelical religion and honor culture as one of the defining features of southern life before the Civil War. The story is usually told as a battle of clashing worldviews, but in this book, Robert Elder challenges this interpretation by illuminating just how deeply evangelicalism in Methodist, Baptist, and Presbyterian churches was interwoven with traditional southern culture, arguing that evangelicals owed much of their success to their ability to appeal to people steeped in southern honor culture. Previous accounts of the rise of evangelicalism in the South have told this tale as a tragedy in which evangelicals eventually adopted many of the central tenets of southern society in order to win souls and garner influence. But through an examination of evangelical language and practices, Elder shows that evangelicals always shared honor’s most basic assumptions.

Making use of original sources such as diaries, correspondence, periodicals, and church records, Elder recasts the relationship between evangelicalism and secular honor in the South, proving the two concepts are connected in much deeper ways than have ever been previously understood.

Robert Elder is assistant professor of history at Valparaiso University.
For more information about Robert Elder, visit the Author Page.

“Occasionally an author treats the academy to a book that challenges everything we think we know in a given area. . . . The Sacred Mirror . . . is such a book.”--Journal of Southern Religion

“This study of white evangelical beliefs and practices . . . convincingly challenges the historiography. Recommended.”--Choice

“An excellent work of religious and cultural history. . . . Highly recommended for historians of nineteenth-century America, as well as for the classroom and the grad seminar.”--Journal of the Civil War Era

“Elder has written a pivotal book, which stops the common narrative of evangelical arrival and accommodation in its tracks. In its place, Elder offers a nuanced argument about the relationship between honor culture and evangelicalism in the Deep South, one that identifies their common sources, persistent tensions, and shared ideals, for good and ill."”--Baptist History and Heritage

“An excellent and important book that succeeds in reframing a major historiographical debate. It should be essential reading among historians of religion and of the American South.”--Journal of American History

“In this elegant and exciting book, Robert Elder sets himself apart by arguing that white southerners hastened modernity’s arrival when they accepted evangelicalism. Elder’s highly nuanced discussion of the relationship between the ‘secular’ culture of southern honor and the ‘sacred’ culture of southern evangelicalism establishes him as part of a robust movement of scholars quick to call attention to the ‘modern’ elements of intellectual discourse in the antebellum South.”--Charles F. Irons, Elon University