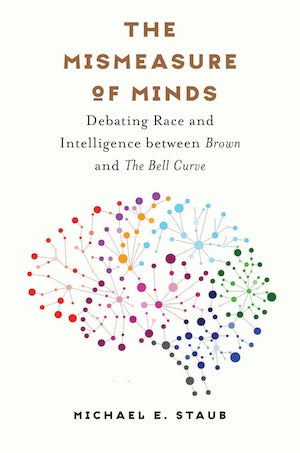 "This extraordinary and timely book will undoubtedly provide clarity to the emerging controversies over innate differences in intelligence, now authorized by genomics studies. . . . One of the many strengths of Staub's book is his fine-grained analysis of the unintended consequences of racial coding in the brain sciences, especially as it relates to the search for a value-free cognitive test. [It will] be of interest not only to psychologists, medical providers and historians but also more broadly to educators, politicians and parents."—Lundy Braun, Social History of Medicine

"This richly researched and wide-ranging work . . . offers a new and fascinating perspective on a familiar story of race in the decades after Brown, illustrating how scientific research on topics from learned helplessness and minimal brain dysfunction to split brain theory and emotional intelligence are integral to understanding the social, political, and policy developments of these decades."—Journal of Southern History

"Thoroughly researched and lucidly written. . . . Staub demonstrates how and why . . . during the past four decades—insofar as the issue of the desegregation of the public schools is concerned—the United States has undergone a period of retrenchment that has resulted in the proliferation of damaged poor whites, as well as poor members of racial minorities. . . . Chilling."—Journal of American History

"A well-argued, concise account of how psychology shaped public policy and popular culture in the postwar United States. . . . The book's brevity and clarity make it appropriate for advanced undergraduates and graduate students interested in race, education, and medicine in the postwar United States. Readers will appreciate gaining a historicized perspective on psychological concepts that remain prominent in American culture today. They will never think about the marshmallow test in the same way again."—Disability Studies Quarterly

"A much-needed exposé of the production of race science in the late twentieth century. . . . The gift of this volume is the rich coverage of debates and debating forces, and of the many different interests and interpretations of those who fueled the ongoing struggle to determine education policy."—Catherine Bliss, Contemporary Sociology