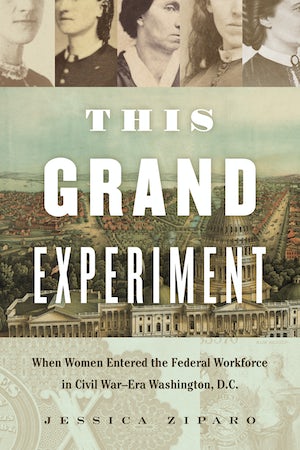 In the volatility of the Civil War, the federal government opened its payrolls to women. Although the press and government officials considered the federal employment of women to be an innocuous wartime aberration, women immediately saw the new development for what it was: a rare chance to obtain well-paid, intellectually challenging work in a country and time that typically excluded females from such channels of labor. Thousands of female applicants from across the country flooded Washington with applications. Here, Jessica Ziparo traces the struggles and triumphs of early female federal employees, who were caught between traditional, cultural notions of female dependence and an evolving movement of female autonomy in a new economic reality. In doing so, Ziparo demonstrates how these women challenged societal gender norms, carved out a place for independent women in the streets of Washington, and sometimes clashed with the female suffrage movement.

Examining the advent of female federal employment, Ziparo finds a lost opportunity for wage equality in the federal government and shows how despite discrimination, prejudice, and harassment, women persisted, succeeding in making their presence in the federal workforce permanent.

Jessica Ziparo earned her Ph.D. from Johns Hopkins University and her J.D. from Harvard Law School.
For more information about Jessica Ziparo, visit the Author Page.

“This Grand Experiment is well researched, with Ziparo having traced about three thousand women who worked for the government in the 1860s.”--Journal of Southern History

“In this excellent book, Ziparo illustrates how women's work during the Civil War made them a regular part of the nation's bureaucracy while also highlighting the inequality that they faced.”--Civil War Book Review

“Rigorously researched and musically written, This Grand Experiment offers a great deal more than a study of a several thousand women—most of them white, most of them desperately trying to maintain their middle-class status, in one city over less than a decade—might suggest.”--Journal of American History

“Provides an excellent, detailed look at another group of women who need to be added to the list of essential war workers: the thousands who sought and gained employment in the federal government from 1861 until the early 1870s.”--Journal of the Civil War Era

“Ziparo creates a strong story on a topic few have considered before by weaving scant sources together to form an engaging narrative.”--American Historical Review

“Deeply researched. . . . Readers with broad interests in Civil War Washington, particularly the social impact of the burgeoning bureaucracy and the reform impulses unleashed by emancipation, should read This Grand Experiment.”--Washington History